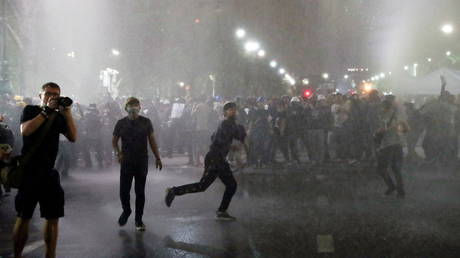 Thousands have taken to the streets of Bangkok to again demand the resignation of Thai PM Prayuth Chan-ocha, and reform of the monarchy. Police deployed water cannon to prevent the crowd from reaching the Royal Palace.

The demonstrators, who attempted to march from the Democracy Monument towards the Royal Household Bureau, were met with a barricade of buses and barbed wire set up by the police. Around 10,000 people took part in the action, according to reported estimates.

Law enforcement had earlier warned that all public gatherings were banned within 150 meters of the royal buildings. Videos from the scene showed them firing water cannon to prevent the crowd from reaching the area outside the Royal Palace, but many still reportedly managed to make it through.

Student-led protests have been ongoing in Thailand since mid-July. Calling for a new and fair vote, demonstrators have demanded the resignation of Chan-ocha. The prime minister is a former military ruler, whom critics accuse of interfering with a general election last year to maintain power as a civilian.

Protesters are also targeting the country’s monarchy and want a law that bans criticism of King Maha Vajiralongkorn to be scrapped, as well as a reduction in spending by the royal family, and limitations on the King’s powers to control national finances and military units.

In the wake of Sunday’s rally, protest leaders rejected the government’s proposals to reform the constitution, calling them “unreliable.” They refused to join a reconciliation panel with the authorities and insisted that all of their demands must be met.

Human rights lawyer and prominent figure in the protest movement, Arnon Nampa, has written an open letter to the monarch, urging him to “reach out to dialogue with us to solve the crises together.”

“We hope you will change your behavior once and for all and become a King of all people,” Nampa wrote.

Also on rt.com
Thailand’s PM vows to lift state of emergency, but protesters insist he must quit in 3 days

King Maha Vajiralongkorn has distanced himself from Thailand’s affairs, mostly staying in Europe after ascending to the throne in 2016.

However, he still has considerable support in the country as dozens of royalists staged a counter-protest in the center of the capital. They were wearing yellow shirts, which is the official color of the king, and waving Thai flags. Some also carried portraits of the monarch and his late father, King Bhumibol Adulyadej.

“The monarchy is the identity of Thailand. We cannot stand without the monarchy,” one of the counter-protesters said.