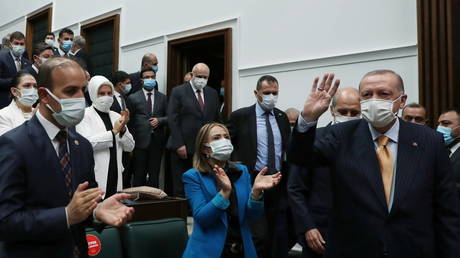 The cartoon published on the magazine’s cover on Tuesday showed the Turkish leader in his underwear, holding a canned drink, lifting the dress of a woman wearing an Islamic hijab.

Turkey’s Communications Directorate said that all necessary steps will be taken against the publication of the caricature in France.

Our battle against these rude, ill-intentioned and insulting steps will continue until the end with reason but determination.

Authorities in Ankara had taken all necessary initiatives, Justice Minister Abdulhamit Gul said, while Turkish prosecutors were reported to have launched an investigation into Charlie Hebdo’s executives.

Top Turkish officials have stressed that a caricature of Erdogan could not be considered freedom of expression. Turkey’s presidential communications director Fahrettin Altun tweeted on Tuesday that Ankara condemns “this most disgusting effort by this publication to spread its cultural racism and hatred.”

French President Macron’s anti-Muslim agenda is bearing fruit! Charlie Hebdo just published a series of so-called cartoons full of despicable images purportedly of our President. We condemn this most disgusting effort by this publication to spread its cultural racism and hatred.

According to Ibrahim Kalin, the presidential spokesman, the weekly showed “their own vulgarity and immorality.”

A row between Turkey and France flared after a teacher who had shown pupils Prophet Mohammed cartoons in class was beheaded in France this month.

Erdogan slammed Macron’s “anti-Islamic agenda” late last week, saying the French president needed a mental health check because of his “problem” with Muslims. The statement came after France launched a police campaign against Islamic radicals in the country and prompted Paris to recall its ambassador from Ankara. On Monday, the Turkish president urged a boycott of French products in the country.

Since the beheading of the teacher, French people protesting in solidarity have displayed more Prophet Mohammed cartoons in the streets as a way to support free speech.

Also on rt.com
‘Europe is united’: French minister urges EU leaders to adopt measures against Turkey at next summit

Chamath Palihapitiya’s Net Worth in 2020