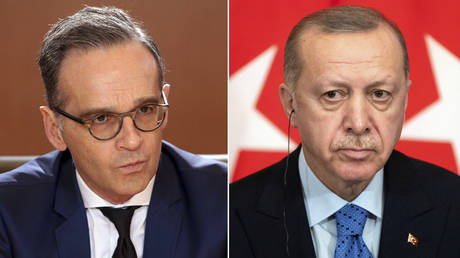 Erdogan’s personal attacks against Macron “mark a new low” and are “unacceptable,” Maas said on Monday.

The minister affirmed that Berlin stands in solidarity with France on the issue of fighting terrorism and Islamic extremism. At the same time, Maas cautioned against conflating the “millions of law-abiding Muslims living in Europe” with “violent extremists and murderers.”

“It would be playing into the hands of those who want to divide our society. We will not accept that,” Maas stated.

Macron announced sweeping plans to crack down on Islamic radicals in France earlier this month, saying that Islam has been “in crisis” globally due to the rise of fundamentalists.

Also on rt.com
France recalls ambassador from Turkey after Erdogan urges Macron to seek ‘mental help’ over his attitude towards Muslims

The campaign was then bolstered by the brutal murder of middle school teacher Samuel Paty who had shown students a cartoon of Prophet Mohammed as part of a lesson on freedom of expression. The government vowed to close down mosques and dissolve Muslim groups that were linked with the dissemination of hate online.

A longtime critic of Macron’s rhetoric toward Muslims, Erdogan suggested on Saturday that the French leader needs to have his mental health examined. Paris responded by blasting Erdogan’s remarks as “unacceptable” and recalling its envoy to Turkey for consultations. On Sunday, Macron wrote tweets in French, English and Arabic that France respects “all differences in a spirit of peace,” but does not accept hate speech and defends “reasonable debate.”

Speaking to reporters on Monday, Maas said that Germany “fully understands” the French diplomatic response to Turkey and “we fully support them.”

Also on rt.com
2nd French mayor threatened with BEHEADING in the wake of teacher’s brutal murder by ‘Islamic terrorist’

Hasty, Aiyuk and Mims Could Provide Huge Value Down the Stretch