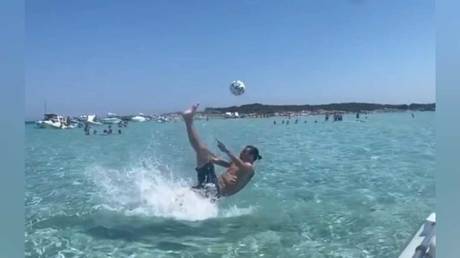 Zlatan Ibrahimovic had a cheeky holiday message for England fans as the giant Swede recreated his stunning long-range overhead kick goal against the Three Lions from back in 2012.

Enjoying a sunshine break after the end of the Serie A season, the AC Milan forward has been cruising the Mediterranean aboard a superyacht.

The big Swede broke off from sunning himself to create a water-based version of the wondergoal he scored against England back in November of 2012, which was part of an incredible four-goal display from the striker.

In a slow-mo clip shared with his 43.7 million Instagram followers, Zlatan tosses the ball into the air before rising from the water to perform a bicycle kick, showing his continued prowess even at the age of 38.

“God Save the Queen,” the Swede captioned the clip, making it clear whom the post was addressed towards.

Zlatan’s four-goal heroics on that night back in 2012 in Stockholm were seen as all the more sweet by the star after perceived jibes from the English press that he would not be able to cut it in the rigors of the English Premier League, despite having picked up silverware at numerous European giants.

His riposte came in the form of a scintillating individual display against an experimental England team, capped with his 30-yard bicycle kick in injury time.

The Swede, who was playing for Paris Saint-Germain at the time, picked up the FIFA Puskas Award for the strike, and said somewhat modestly of the goal: “I saw [England goalkeeper Joe Hart] come out and had to decide whether I should go in a duel or wait for him to head it out.

“When he headed it I had it in my mind to try to score. I hit it in mid-air and, when I landed, saw [Shawcross] running back to try to clear but it bounced over him. It was a good try, that is all.”

Having since further proved the doubters wrong during spells at Manchester United, LA Galaxy and now again at AC Milan, Zlatan’s immediate future is still unclear after his contract at the Italian giants came to an end.

Milan sporting director and club legend Paolo Maldini has signaled however that the Swede will be crucial to the team again next season, despite the two parties yet to agree an extension to their deal.

“We have created something this season which needs continuity. Zlatan is part of this project. It won’t be any easy negotiation but we want to move forward with him,” said Maldini.

Zlatan struck 10 Serie A goals in 18 appearances last season, helping rejuvenate the San Siro giants for the second part of the campaign.

The Swede has shown he’s staying in shape during the summer despite enjoying the luxury environs of the megayacht he is staying on with his family.

‘Needs to’, ‘please’: Some Liverpool fans want 23-year-old to get his second Reds PL start this weekend

Liverpool set to open talks over new deal for Fabinho