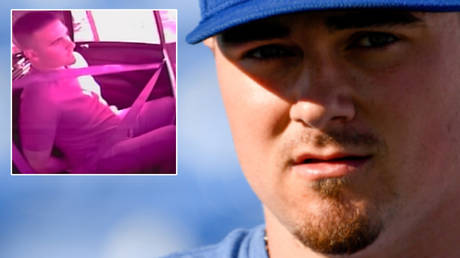 Footage has emerged of the exchange when cops questioned baseball catcher Reese McGuire after he was allegedly caught pleasuring himself in a public parking lot, with the Toronto Blue Jays player admitting he had been an “idiot”.

New footage has revealed that McGuire was surprised to be interrupted by police while he was in his vehicle, explaining to him that they had been alerted by people who had reported seeing him carrying out a depraved act half-naked in the lot.

The 25-year-old gingerly confessed: “I just…I don’t know. That wasn’t the reason why I decided to park.

“I’ve realized that I made a mistake having my pants down and doing what I was doing.

“If there’s any way I can really learn from it, hopefully no-one’s harmed.

“I really am apologetic and I know I shouldn’t have been doing this.”

The Major League Baseball star can then be seen with his hands cuffed behind him as he chats to an officer from the back of a police car.

“Is it for sure a going-to-court kind of thing?” he enquired, hinting at the agreement he reached with authorities earlier this month when his charge was reduced to a second-degree misdemeanor of disorderly conduct.

“The simple fact is that it’s a misdemeanor because you’re in public,” explained the officer.

“It’s just whether or not you go down to jail and get booked in for a misdemanor.”

A spokesperson for the State Attorney’s Office in Pinellas County told TMZ that McGuire received a punishment of fines and court costs.