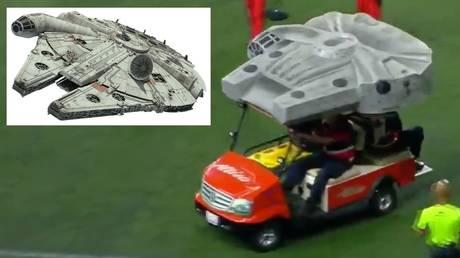 Liga MX side Xoros have opted for a novel way to ferry injured players from the pitch after bizarrely modifying their injury cart to resemble the Millennium Falcon spaceship from the popular Star Wars film franchise.

Xolos de Tijuana has a history of Star Wars tie-ins, having previously walked out to the pitch soundtracked by the movie’s famous theme, flanked by Stormtroopers, as well as playing in Star Wars themed kits.

But the latest evidence of the club’s fandom for the science fiction film series has gone one step further.

🇲🇽 Club Tijuana are walking out to the music from Star Wars…. with actual stormtroopers.And Los Xolos are also using a Star Wars themed kit for the last matches in this season’s Liga MX. 🤯 It didn’t help much last night, they lost 4-0. pic.twitter.com/qgOwmB90EI

Thurday’s fixture between Xolos and Tigres ended in a goalless draw, but any lack of action on the pitch was overshadowed by the extravagant nature of the injury cart used by the club, which has generated plenty of response online after being shared in a clip that went viral on Friday.

The club’s association with Star Wars is underscored by David Chavez, the vice president of marketing for The Walt Disney Company Mexico.

“This project also reflects our commitment to the promotion of healthy lifestyle habits, encouraging sports and outdoor activities through our stories, content, experiences and characters,” he said.

I know what you’re all thinking. “Cesar, who cares about manager quotes? Give the people what they want!”Fine, here are some close up photos of Xolos’ Millennium Falcon medical cart. #LigaMXengpic.twitter.com/58CHEskDtn

Xolos, meanwhile, say that the move – which has actually been in place for several months – is a nod to the popular film series and reflects the club’s pursuit of innovation.

“The agreement reached to celebrate the end of the Skywalker saga makes clear testimony of two important objectives: innovation and vanguard,” Esteban De Anda, the team’s director of strategic alliances and marketing, said.

It remains to be seen if the team’s Star Wars collaboration will pay dividends with the team currently languishing in the mid-table positions in Liga MX – though perhaps the club’s hierarchy may appeal directly to the Rebel Alliance for further assistance.