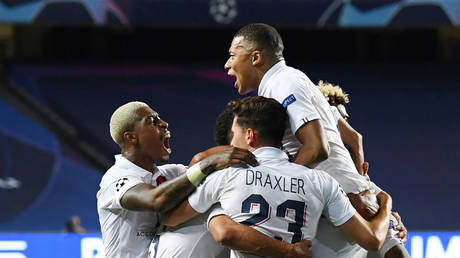 Paris Saint-Germain pulled themselves back from the brink of Champions League elimination with two late goals to beat Italian underdogs Atalanta 2-1 in a thrilling quarterfinal in Lisbon.

PSG looked destined for yet more disappointment in Europe as they trailed from a first-half Mario Pasalic goal heading into injury time, but a deflected finish from Marquinhos and a goal from Eric Maxim Choupo-Moting saved the French champions.

PSG had looked like fluffing their lines on Europe’s biggest stage yet again with Brazilian star Neymar guilty of missing several golden chances, but they ultimately dug themselves out of a hole to reach a first Champions League semifinal since 1995.

It was agony for Gian Piero Gasperini’s brave Atalanta team, who were appearing in a maiden Champions League campaign and appeared set to defy the odds once more until PSG’s late, late show broke their resolve.

Ahead of the one-off knockout tie in Lisbon – part of the truncated Champions League format introduced by UEFA as a result of the Covid-19 pandemic – much had been made of the mammoth financial imbalance between the two teams, with Neymar’s annual salary accounting for that of the entire Atalanta wage bill.

But Atalanta were not daunted by the occasion: a team consistently defying the odds domestically, they are gritty but bold and attack-minded – and were taking their show on a European tour.

It was the Italians who drew first blood in the 26th minute in Lisbon, a loose ball deflecting to former Chelsea man Pasalic just inside the box, with the midfielder guiding a shot past Keylor Navas and into the top corner.

PSG were frustrated, with Neymar alternating between flashes of brilliance but also woeful finishing.

The Brazilian raced through from the half-way line but somehow side-footed well wide of the goal when one-on-one with Marco Sportiello, later blasting a shot wide when gifted a chance through a wayward Atalanta backpass.

The first half in Lisbon saw the good, the bad and the ugly from the Brazilian, and as PSG boss Thomas Tuchel hobbled off on crutches at half-time – the victim of a freak recent training accident – he must have feared it would be another one of those nights when his team tripped up in Europe.

Five minutes into the second half and Neymar again showed the Jekyll-and-Hyde night he was having, planting a 30-yard free-kick directly into an Atalanta body but moments later playing a delightful raking pass and pulling off a nutmeg.

The Brazilian was dropping deep, increasingly desperate to make things happen but getting little help from his teammates.

Tuchel introduced assistance just before the hour mark in the form of Kylian Mbappe – whose participation had been in doubt after an suffering ankle injury in the French Cup final just over two weeks ago – while Atalanta lost influential captain Papu Gomez through injury.

PSG’s own problems mounted when goalkeeper Navas went down injured with 20 minutes to play, leading to substitute Sergio Rico being called into action.

As PSG pressed it seemed Atalanta would hold on for a famous victory, but as the clock ticked down they were dealt a cruel blow when Neymar found Marquinhos,whose shot from close range went in off Atalanta defender Mattia Caldara.

The heartache for Atalanta was not done there though, as a slick PSG move saw Neymar feed Mbappe, whose square ball was tapped in by substitute Eric Maxim Choupo-Moting three minutes into injury time to send his team into the last four.

The European hopes are still alive – just – for PSG and their big-money Qatari benefactors, but they know they will desperately need to improve their finishing against either RB Leipzig or Atletico Madrid when they meet in the last four in Portugal on Tuesday.