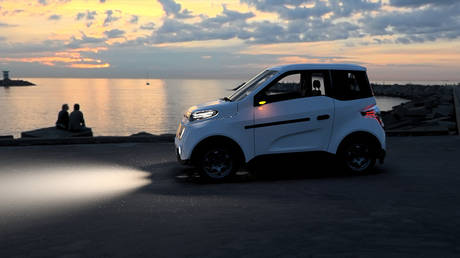 The Zetta will roll off the production line in the city of Tolyatti, one of the major centers of Russia’s automotive industry. The cars will first be sold on the domestic market, but the initial business project implies that the Zetta may be exported to other countries, Manturov said.

The minister told TASS news agency that the vehicle’s certification is currently 70 percent complete, but he expects the procedure to be finished by the end of the year.

The Zetta’s producers earlier revealed that 10 cars will roll off the production line this year, while they are planning to boost this number to 2,000 vehicles in 2021. The factory can manufacture around 15,000 a year.

The Zetta is the first Russian fully electric vehicle that is set to be available to the general public. According to local media, the cheapest vehicle configuration would cost 450,000 rubles (around $6,000). Its range is set to be between 200 kilometers for the cheaper models to 560 kilometers in advanced ones.

Russians have much less appetite for EVs than people in other parts of the world, with less than 300 new electric cars sold last year, according to daily newspaper Kommersant. The demand for new electric cars is higher in the country’s big cities, such as Moscow and St Petersburg, while people in other regions have been looking for such cars in the second-hand market.

While most EVs are quite pricey, another reason for low demand in Russia is that the country lacks a broad charging infrastructure; it is mostly centered in cities with large populations.

Fascinating! What are Flavoured Condoms and Its Benefits