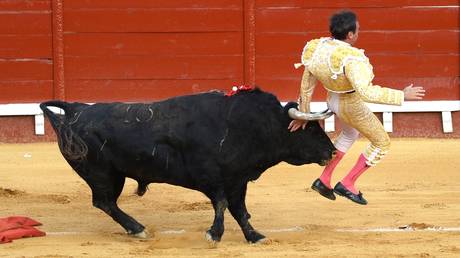 Enrique Ponce was gored in a particularly painful place during a bullfight in Cadiz, Spain, as a dying bull exacted some retribution by stabbing the matador in the backside before being killed.

The controversial sport, which has divided the Spanish population for decades, is still a legal part of the country’s sporting culture, with events attracting large crowds.

With Ponce moving in for the kill, the bull flipped over the matador, goring him in the buttocks as it did so. It sent Ponce flying through the air and onto the floor, where he laid flat on his front, protecting his head.

The matador sustained only minor injuries, with reports stating he had torn knee ligaments and sustained bruising. But it was a different story for the bull, which was subsequently killed.

Ponce then went on to kill a second later in the event, which took place in front of a packed crowd, despite a spike in COVID-19 cases.

The event was criticized by Spanish animal rights group La Tortura No Es Cultura (Torture Is Not Culture), with spokeswoman Carmen Ibarlucea stating, “Have we not already had an overdose of death and pain in these past months?”

It’s not the first time we’ve covered Ponce’s exploits, with the matador also being gored in the buttocks by a bull during an event in 2019.

Also on rt.com
Spain’s leading matador gored in the buttocks by bull at Spanish festival (VIDEO)