Arsenal held off a valiant comeback from Watford to triumph 3-2 at Emirates Stadium, a result that confirmed the visitors’ relegation to the Championship.

An otherwise disappointing Premier League campaign for the Gunners ended on a winning note thanks to a brace from Pierre-Emerick Aubameyang, though their focus was always on next weekend’s FA Cup final against Chelsea.

Watford, in contrast, had plenty to play for. They kicked off inside the relegation zone but were unable to produce a final-day miracle, not aided by conceding a penalty inside the opening minute. 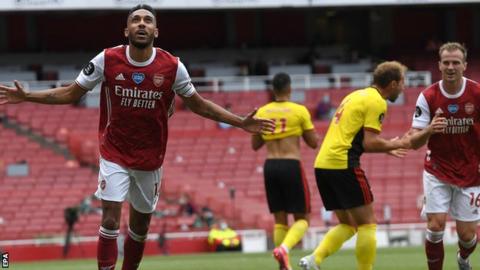 Caretaker boss Hayden Mullins – who replaced Nigel Pearson with just two games remaining – watched his side fight hard after falling 3-0 down, yet even a defiant draw would not have been enough to spare them from the drop.

The Hornets were stung early when Craig Dawson’s careless barge into the back of Alexandre Lacazette was spotted, albeit only after a lengthy VAR check. Aubameyang duly converted from the spot, though the away team had opportunities to hit back.

Roberto Pereyra had an attempt saved by Emiliano Martinez, while Rob Holding inadvertently blocked a Troy Deeney header with his face, before Kieran Tierney’s shot found the net at the other end.

Watford aided Aubameyang’s ultimately failed quest to win the Golden Boot when allowing the striker to control a long throw and convert with an overhead kick from six yards out, though Arsenal returned the favour by gifting their opponents an opportunity to pull one back.

David Luiz’s sliding lunge only made contact with former Gunner Danny Welbeck, allowing Deeney to fire in a much-needed lifeline prior to the half-time interval.

Having rallied from 2-0 down to draw in the reverse fixture earlier in the campaign, there was renewed belief of history being repeated when Welbeck tapped home in the 66th minute.

However, the forward was denied an equaliser when his clever back-heeled effort was kept out by a diving Martinez, and the game was up once Deeney planted a late header over the crossbar.