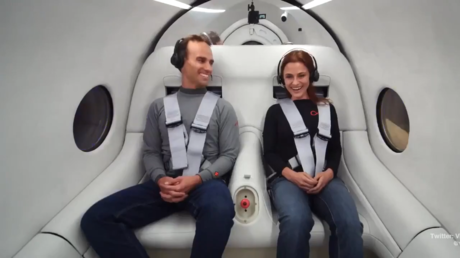 Richard Branson’s Virgin Hyperloop has successfully completed its first manned test of the ultra-high-speed pod transportation system in the Nevada Desert, in a major milestone for the so-called fifth mode of transport.

On Sunday, Virgin Hyperloop executives Josh Giegel, its chief technology officer, and Sara Luchian, its director of passenger experience, were blasted at up to 107mph (172kph) through the DevLoop – a test track in Las Vegas that’s 500 meters long and 3.3 meters in diameter – in a journey that lasted just 15 seconds.

Virgin Hyperloop claims to have conducted some 400 unmanned tests, but this latest manned test was the next major milestone towards commercial electric propulsion with passive magnetic levitation through a near-vacuum tube. The technology, if it ever comes to fruition, has the oft-touted potential to revolutionize both human and cargo transportation.

The ultimate goal is to transport passengers and cargo through vacuum tubes in journeys of up to 670 miles (1,079km), at speeds of 600 miles an hour (966kph) or more. For example, a trip from New York to Washington (328km/204 miles) would be expected to take just 30 minutes, should the Hyperloop ever become a reality. By contrast, the Shanghai Maglev considered the fastest commercial bullet train on Earth – can reach a top speed of ‘only’ around 300mph (482kph).

The technology promises travel that’s twice as fast as what can be achieved by a commercial airliner and four times as fast as the US’ current high-speed rail transport. Virgin is aiming at gaining safety certification for the Hyperloop by 2025 and to be in commercial operation by 2030.

“With today’s passenger testing, we have successfully answered this question, demonstrating that not only can Virgin Hyperloop safely put a person in a pod in a vacuum environment, but that the company has a thoughtful approach to safety,” Jay Walder, Virgin Hyperloop’s chief executive said.

Tesla and SpaceX CEO Elon Musk published his “alpha paper” outlining the idea for the Hyperloop system back in 2013, but the technology has faced an ongoing series of regulatory and financing setbacks ever since the plans were made open source.

There are still numerous safety concerns about the system, regardless of the successful manned test, especially regarding how the technology would scale, and how safe it would be from natural disasters and nefarious actors.

No country has yet given regulatory approval for the development of such a mass transport system, but technologists nonetheless remain hopeful that a new era of transportation could be right around the corner.

What time is the Destiny 2 live event? Seasons of Arrival is ending soon – HITC

How to get TOTGS (Team of the Group Stage) players – HITC