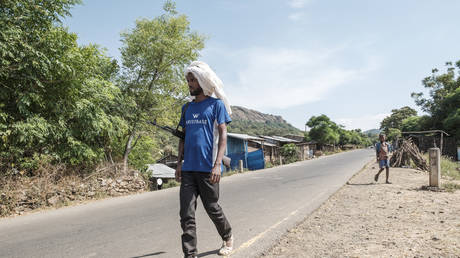 Ethiopia’s PM has unexpectedly replaced key officials, as the offensive against his country’s northern Tigray region gains momentum. The region’s leadership, in turn, said it will fight until central government negotiates.

The abrupt reshuffle was announced by PM Abiy Ahmed on Sunday, when he replaced his army chief, the head of intelligence and the foreign minister. Abiy did not give any reasons for the change, which came amid the ongoing five-day offensive against the Tigray region.

The operation against Tigray was launched earlier this week, the central government claiming it was needed “to restore the rule of law” there. An alleged attack by troops loyal to the Tigray People’s Liberation Front (TPLF) on a national military camp was used as a direct pretext to launch the hostilities. The TPLF – a powerful faction that used to rule Ethiopia for years before Abiy came to power in 2018 – rejected the accusations, insisting that no attack took place.

The Tigray authorities have accused the central government of repeatedly launching airstrikes on targets within the region. The government, however, did not confirm the airstrikes, insisting that the operation against a rogue region is being carried out in a “limited” fashion.

Tigray president Debretsion Gebremichael told Reuters on Sunday that the region was ready to defend itself until the central government accepts negotiations. He also said that Ethiopian troops failed to achieve any gains against the TPLF troops and the federal control in the region amounts to “zero.”

The operation against Tigray has heavily affected Abiy’s international image: he’s previously been hailed as a ‘peacemaker’, who came into power amid protests against the TPLF government. Last year, Abiy was even awarded the Nobel Peace Prize, for his efforts in bringing “reconciliation” to the region, namely striking a peace agreement with Eritrea, which broke off from Ethiopia in the 1990s.

Now, the Nobel Prize winner has been called out by the UN, which said the brewing conflict was “deeply alarming” and called for an “immediate de-escalation of tensions and a peaceful resolution.” UN Secretary General Antonio Guterres said the stability of Ethiopia was “important for the entire Horn of Africa,” signaling that the hostilities might send the region, battered by decades of wars, into a new period of turmoil.