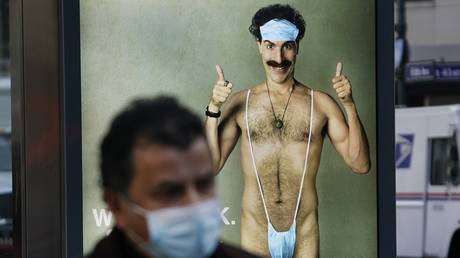 With religious tensions running high following recent terror attacks, Muslims in France are up in arms over bus posters for the latest Borat film, which show the Kazakhstan character wearing a ring bearing the word ‘Allah’.

The controversial ads adorned buses across Paris and featured actor Sacha Baron Cohen wearing little more than a facemask-mankini and a pair of socks. The grinning comedian is seen giving the thumbs-up, and eagle-eyed Muslims noticed he is wearing a ring inscribed with the word ‘Allah’ in Arabic script.

While Baron Cohen is Jewish, his character Borat is from Muslim-majority Kazakhstan. The ads sparked particular anger amongst Muslim bus drivers. One widely shared video featured an unidentified driver branding the poster “incredible” and offensive, and pledging to remove it.

Reports in French media outlets noted that a spike in vandalism cases was observed in Paris-region buses after the ads went into circulation. Despite the outcry, the capital’s main transport operator, RAPT, refused to remove the posters. However, the TICE network, which serves an area with a large Muslim population, took the advertisements down.

The furor comes amid rising tensions prompted by the French government’s crackdown on radical Islam, as the country reels from a spate of jihadist attacks. Last week, an Islamist attacker armed with a knife killed three people in a church in Nice. That incident came less than two weeks after teacher Samuel Paty was beheaded after showing students cartoons of the Prophet Muhammed during a lesson on freedom of speech.