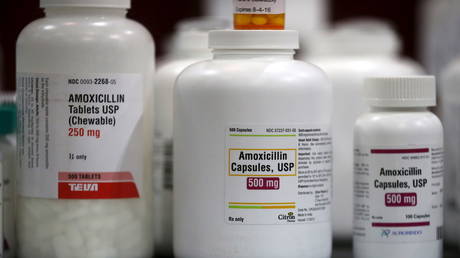 New research has warned that babies and toddlers who receive antibiotics are more likely to develop childhood health issues, such as asthma, eczema, hay fever, food allergies, and celiac disease.

A study published on Sunday in the journal Mayo Clinic Proceedings says that childhood health issues are more common in children who received one or more doses of antibiotics before the age of two.

The research, which analyzed data from over 14,500 children who are part of the Rochester Epidemiology Project, found that children who were exposed to multiple antibiotics were more likely to develop combinations of medical conditions.

The researchers highlighted that childhood health conditions varied according to the child’s gender and age, and the medication type, dosage, and number of doses administered.

The study found that in children who received one or two antibiotics before the age of two, only girls were at considerably higher risk of developing asthma and celiac disease compared to those unexposed to antibiotics.

In contrast, receiving more than two antibiotic prescriptions was linked with multiple health conditions in both sexes, in addition to ADHD and celiac disease in girls and obesity in boys.

However, exposure to antibiotics was not always found to be linked to an increase in childhood health conditions. The researchers claim that penicillin was associated with a reduced risk of autism in girls.

The study’s senior author, Professor Nathan LeBrasseur, claimed the research does not demonstrate causation, but opined that “these findings offer the opportunity to target future research to determine more reliable and safer approaches to timing, dosing and types of antibiotics for children in this age group.”

The researchers repeated the need for further research to corroborate their findings.