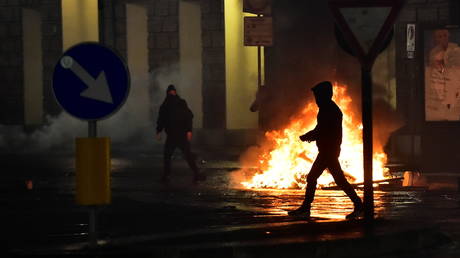 Chaotic demonstrations have ignited in several Italian cities, where throngs of protesters were seen fighting with law enforcement and ransacking businesses as they called for an end to the country’s sweeping coronavirus lockdown.

Protests were reported in at least five cities on Monday night, with physical clashes erupting in Turin and Milan, two of Northern Italy’s largest urban centers, the latter of which has been among the hardest hit by the pandemic.

In my home city of Milan, where I have barely seen a violent protest take place in my life, protesters against new pandemic restrictions measures are throwing what appear to be molotov cocktails at police and chanting “Libertà” pic.twitter.com/QfpXbZUfxf

Some of the protest rallies and ensuing violence were captured in footage that circulated on social media, including an encounter in Milan that saw demonstrators hurl what appears to be a petrol bomb at an approaching police car while chanting “Liberta!” (“Freedom!”) at the officers.

Protesters also carried brightly burning flares and set off fireworks as they marched down rain-soaked streets.

Scenes from Turin showed crowds of protesters rallying amid a haze of police tear gas, some of them breaking off from a larger group to vandalize storefronts.

A Gucci store was also reportedly ransacked in the city, while small fires were lit elsewhere.

Rallies were not confined to Northern Italy, however, as actions also kicked off as far south as Lecce and Naples, while a march was also seen in Treviso, some 15 miles (24km) north of Venice.

The protests got underway soon after the Italian government renewed nationwide lockdown measures on Sunday, imposing a 6pm curfew on bars and restaurants while shuttering public swimming pools, gyms and movie theaters. Some regions have also imposed their own curfews – including Lombardy and Piedmont, where Milan and Turin are located, respectively – citing what some health experts have deemed a “second wave” of the coronavirus outbreak.

While citizens largely complied with an initial round of shutdowns in the spring, the new measures stoked immediate backlash, as residents label the restrictions draconian and small businesses struggle to stay afloat, taking a beating during the first lockdown. In an effort to address their concerns, the government said it would present a relief package on Tuesday to support businesses harmed by the new policies, which will stay in force until at least November 24.

Italy has tallied more than 542,000 coronavirus infections and nearly 38,000 deaths in total, according to data gathered by Johns Hopkins University. Over the spring, the country became the world’s top Covid-19 hotspot and was the first to impose a national lockdown, and while its outbreak waned during the warm summer months, new cases have skyrocketed in October, with more than 21,000 infections reported on Sunday alone. Fatalities, however, have not seen a similar surge, remaining far below the high-point reached in March and April.

Also on rt.com
‘We’ll do all we can to avoid 2nd lockdown’: Italy imposes new Covid-19 restrictions amid record-high daily case growth

Texas Quietly Turning Up the Chaos