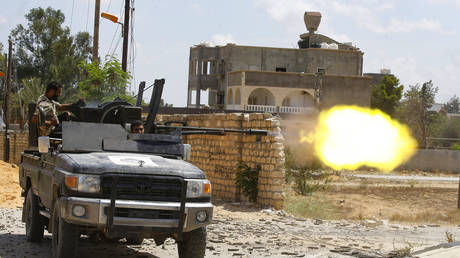 The opposing parties in the Libyan conflict signed a deal on Friday for a permanent nationwide ceasefire, the UN said, adding that the move could become a turning point towards stability in the country.

The ceasefire accord between the two delegations of the Libyan 5+5 Joint Military Commission was reached at the United Nations headquarters in Geneva, and the UN Support Mission in Libya (UNSMIL) showed a live video of the signing ceremony on its Facebook account on Friday.

Military representatives of the internationally recognized Government of National Accord (GNA) and commander Khalifa Haftar’s eastern-based Libyan National Army (LNA) participated in the negotiations that are likely to be followed by political consultations in Tunisia next month.

The talks culminated in “a historic achievement” when the Libyan parties reached a permanent ceasefire agreement in all areas of the country, the UN said. It marks “an important turning point towards achieving peace and stability in Libya.”

Friday’s move comes after mediation led by UN envoy Stephanie Williams this week. “Your patriotism was your way forward and you were able to reach a ceasefire agreement,” she told the delegations after the signing ceremony.

The first commercial passenger flight in more than a year from Tripoli landed in the eastern city of Benghazi on Friday, and Williams also hopes the accord reached in Geneva will allow displaced people and refugees to return to their homes.

UN Secretary-General Antonio Guterres said in early October that “Libya’s future is at stake.” He described the peace talks in Geneva as a “rare opportunity” for peace.

Libya is split between the GNA and the LNA, which control the eastern part of the country. Haftar-led forces launched an assault on Tripoli in April 2019, which ended in June, after Turkey intervened in the conflict.

Turkish President Recep Tayyip Erdogan said on Friday only time will show how lasting the ceasefire in Libya will be. “Its reliability does not seem too achievable to me,” he noted.