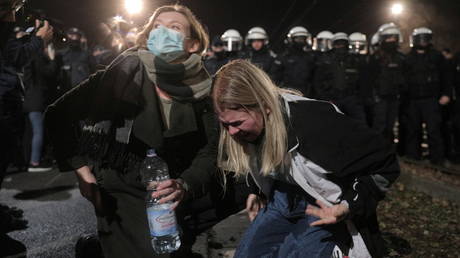 Police fired pepper spray at hundreds of demonstrators in Warsaw as they opposed a court ruling almost completely banning abortion in the country.

Several hundred people gathered in front of Poland’s Constitutional Court and marched towards the residence of the Jaroslaw Kaczynski, the leader of the country’s ruling Law and Justice Party (PiS), to protest a court decision that essentially outlaws abortion.

Police used pepper spray to disperse the crowd. In response, the protesters threw rocks and attempted to break through the cordon around the house.

The demonstration was finally dispersed in the early hours of Friday morning. However, the organizers called for more people to gather throughout the day. A police spokesman confirmed 15 people were detained.

Thursday evening also saw smaller protests in other locations across Poland, including Krakow, Lodz and Szczecin, which went ahead without clashes with law enforcement.

THE FIRST PROTEST IS ALREADY HAPPENING IN POLAND’S CAPITAL WARSAW. POLISH WOMEN WILL NOT BE SILENCED AND THEY WILL NOT BE STOPPED!! pic.twitter.com/7gSpMuaKh4

Opponents of the court’s ruling have accused the judges of acting on behalf of the PiS, as the party nominated the majority of individuals on the Constitutional Tribunal. PiS has denied any attempts to influence the court.

The Council of Europe Commissioner for Human Rights Dunja Mijatovic called it a “sad day for women’s rights,” and said, “removing the basis for almost all legal abortions in Poland amounts to a ban and violates human rights.”

“Removing the basis for almost all legal abortions in Poland amounts to a ban and violates human rights. Today’s ruling of the Constitutional Court means underground/abroad abortions for those who can afford and even greater ordeal for all others. https://t.co/fTp7VMyXhU

Poland’s Constitutional Tribunal ruled on Thursday that abortion due to fetal defects are unconstitutional, banning the most common legal grounds for terminating a pregnancy in the country. Prior to the decision, Poland already had some of the strictest anti-abortion laws in Europe.

Also on rt.com
Poland says it will QUIT European treaty on violence against women over requirement to teach children ‘ideological’ gender theory