Home PEOPLE LUXURIES The 15 Most Beautiful Castles in Germany

With over 2,000 years of rich history, Germany is home to some of the most beautiful castles in the entire world, a country with more than 20,000 palaces, forts and manors, just waiting to be discovered. Whether you’re a history buff, just appreciate beautiful architecture or you’re into photography, then castle visits must be on your bucket list.

If you’re not sure which places you should visit first, we’ve made a list with the 15 most beautiful castles in Germany. 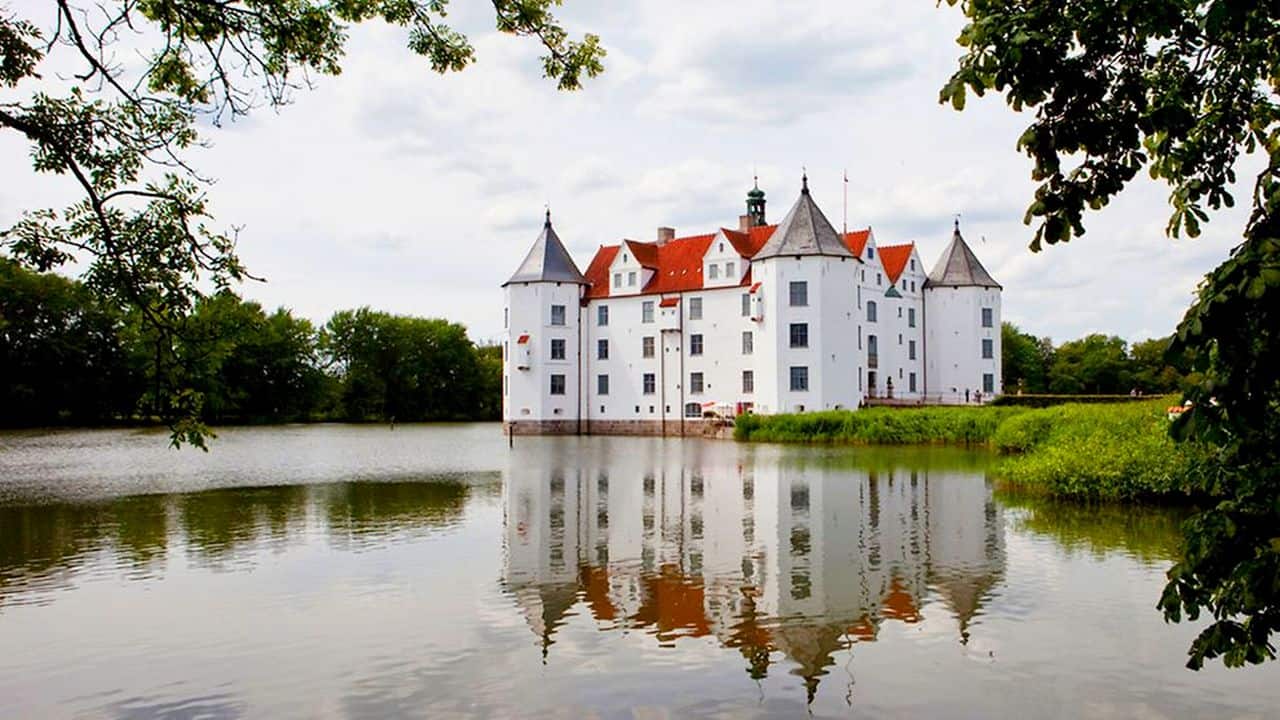 One of the most important Renaissance castles located in Northern Europe, the superb Glücksburg Castle sits on the Flensburg Fjord in the town of Glücksburg. It was built on an old monastery which housed many dukes and nobility since the middle of the 16th century. Since its close proximity to the Danish border it was also used by many Danish kings throughout history. 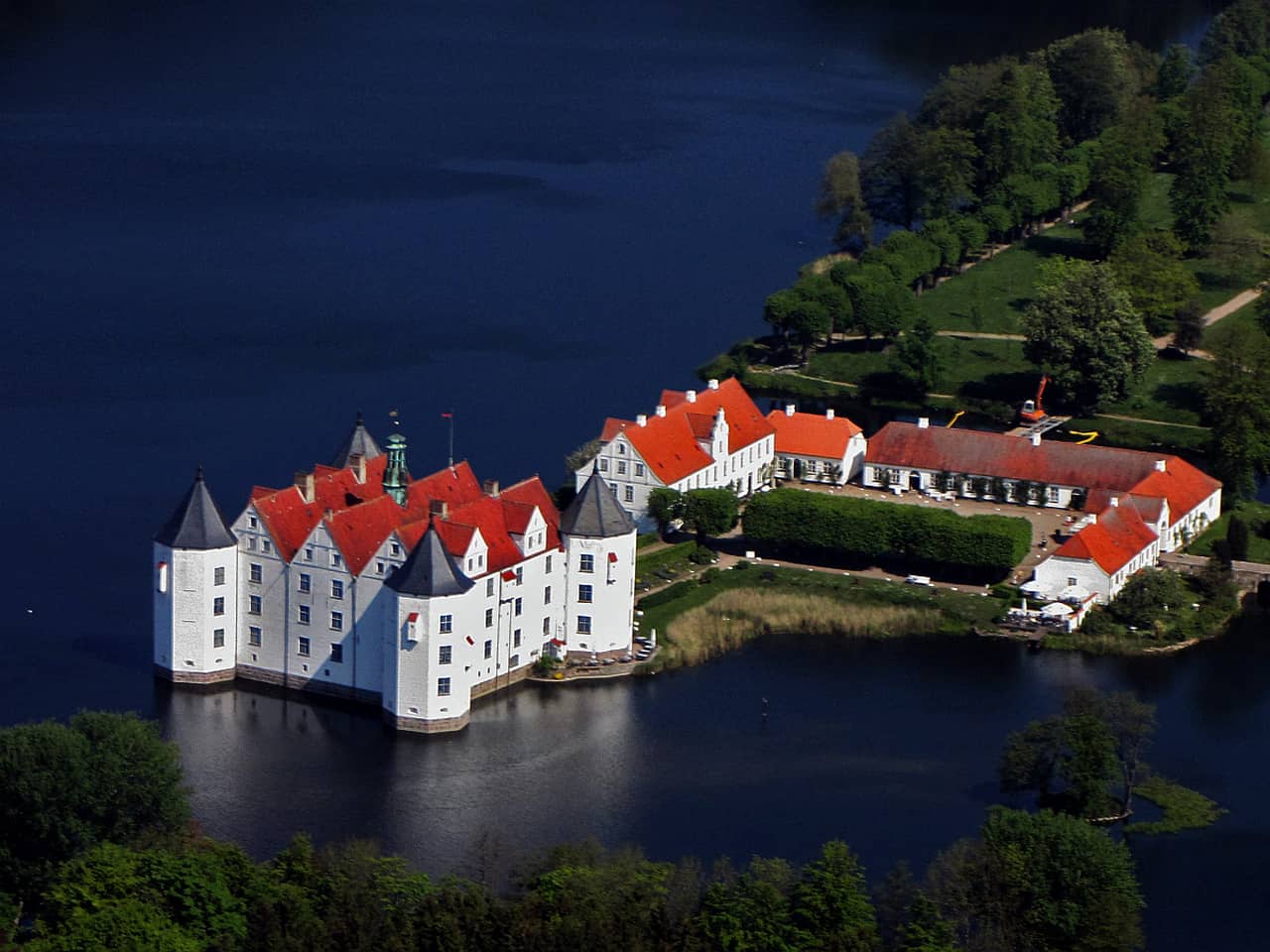 Owned by a foundation headed by Christoph, Prince of Schleswig-Holstein, it operates as a museum which is open to the public. If you happen to be in the vicinity it’s worth a day trip especially when their gardens are open. 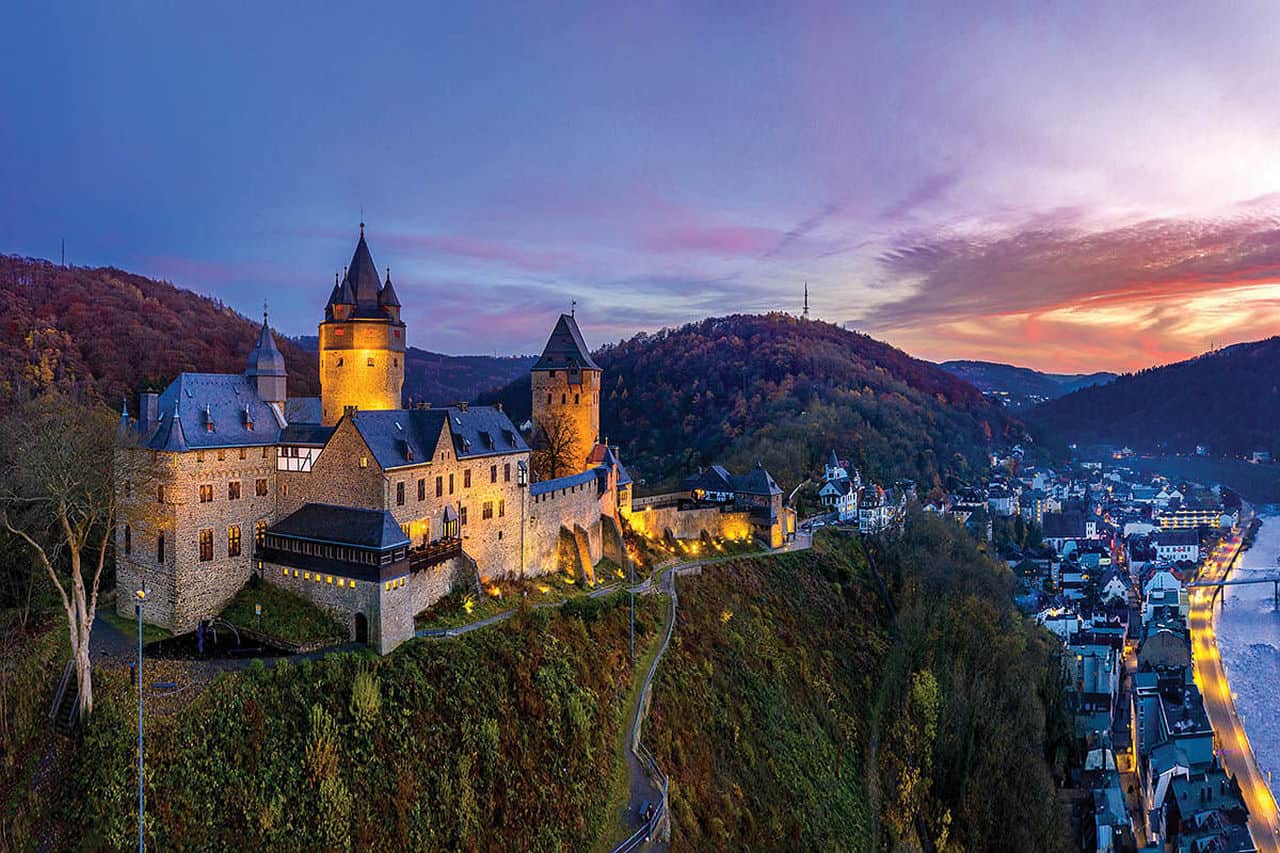 The Altena Castle is located in the small town of Altena, a 40 minute drive from Dortmund. Built in the 12th century on the Klusenberg hill this medieval castle was owned by the counts of Berg. 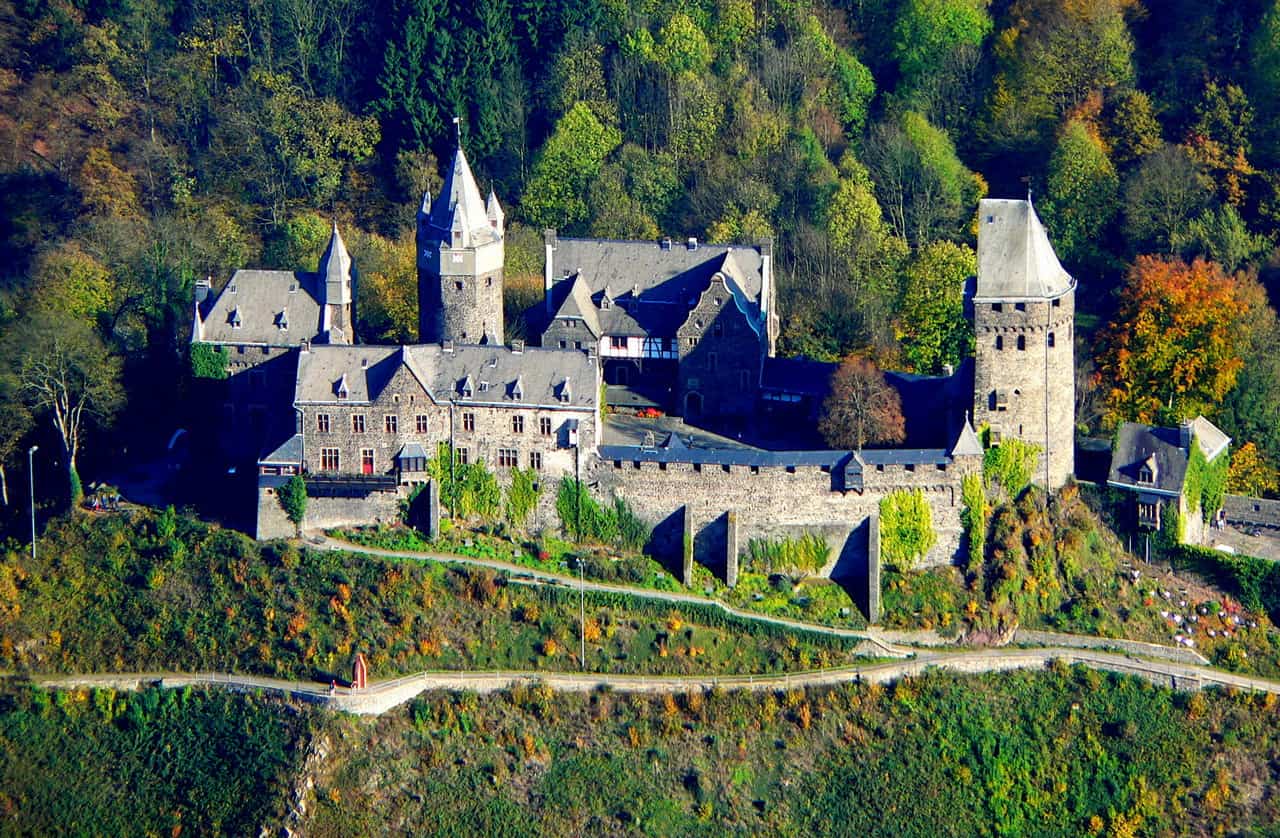 The house of Berg eventually abandoned it, was even used as a courthouse and prison at one point in time, and in 1914 Richard Schirmann turned it into a youth hostel, which is still operating today. The hostel is on the lower castle court yard, while the rest of the rooms are a museum. 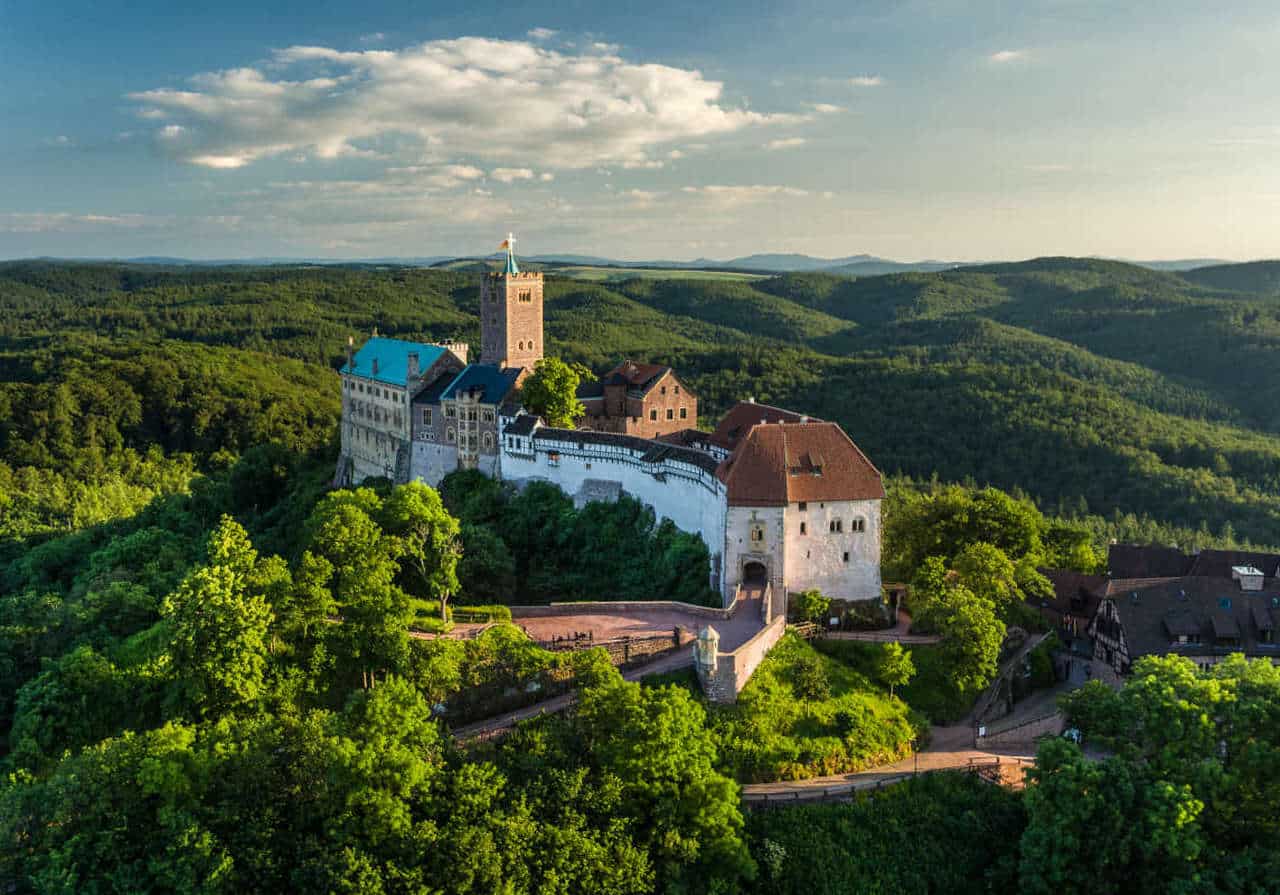 This charming hilltop castle located in the town of Eisenach in central Germany was designated an UNESCO World Heritage site in 1999. 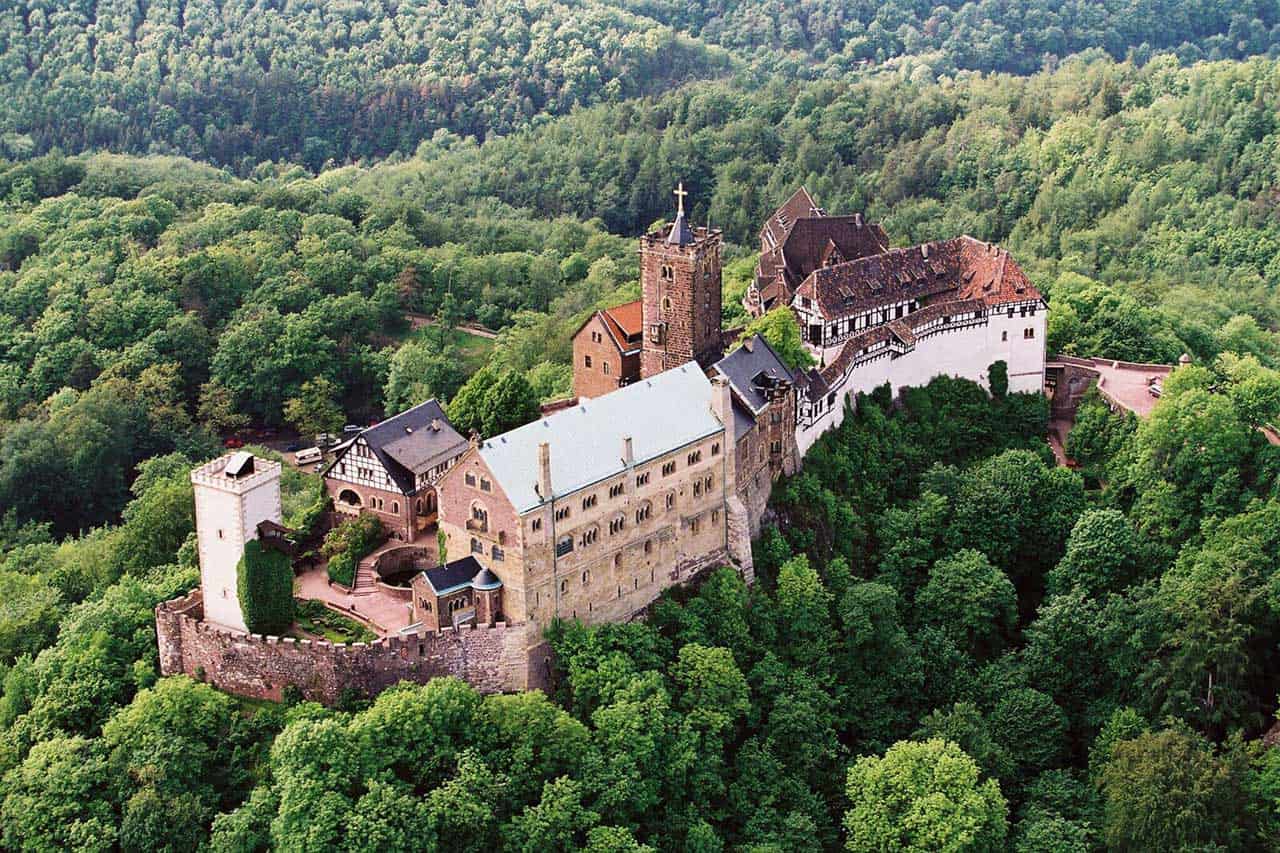 Over 1,000 years of Germany’s rich history are still present today, as some of its original structures from the 12th and 15th centuries have been preserved. The interiors were restructured in the 19th century, which makes Wartburg Castle a must see. 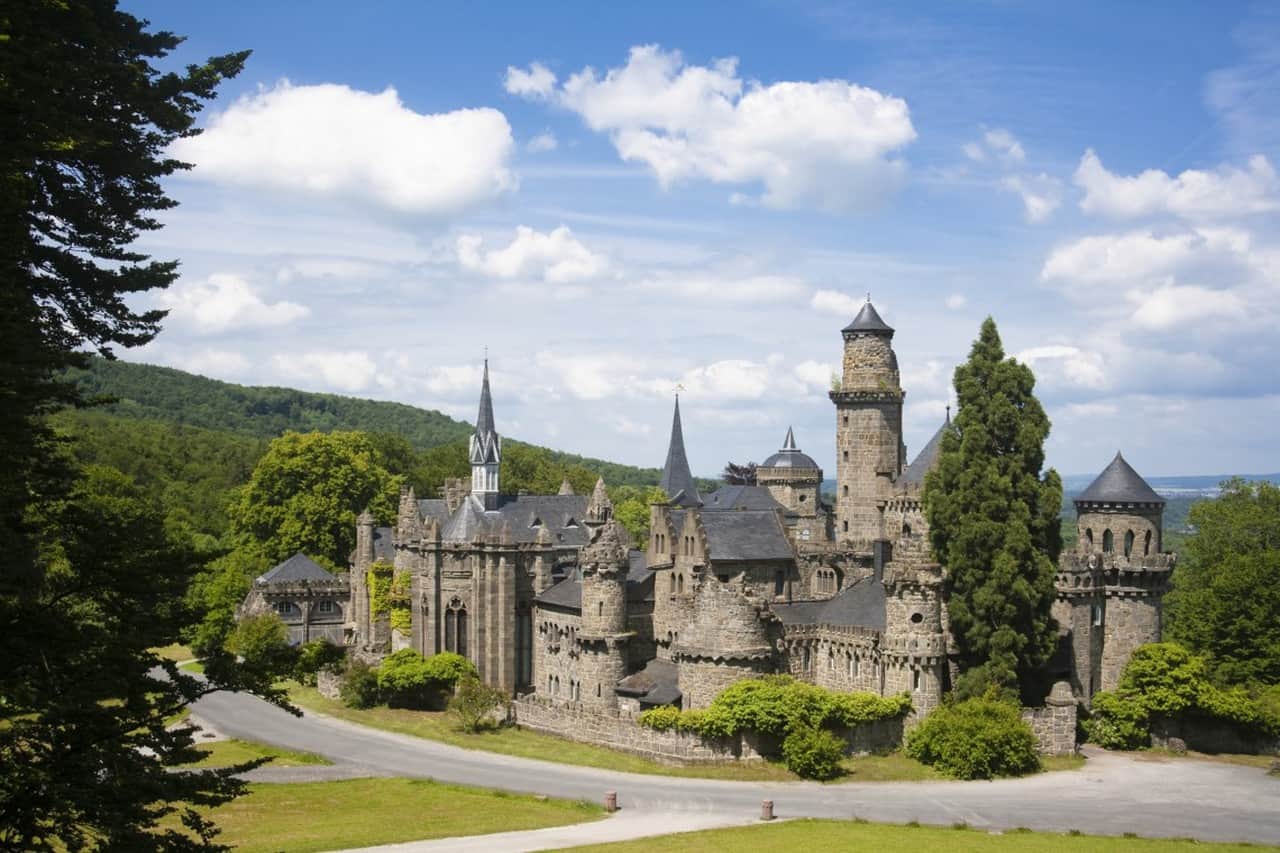 A late 18th century “Castle of Lions “, Löwenburg Castle is a medieval castle which was purposely built as a fortress. Sitting in the Bergpark Wilhelmshöhe near the town of Kassel, the Grimm Brothers’ charming city, makes this castle a must-see. 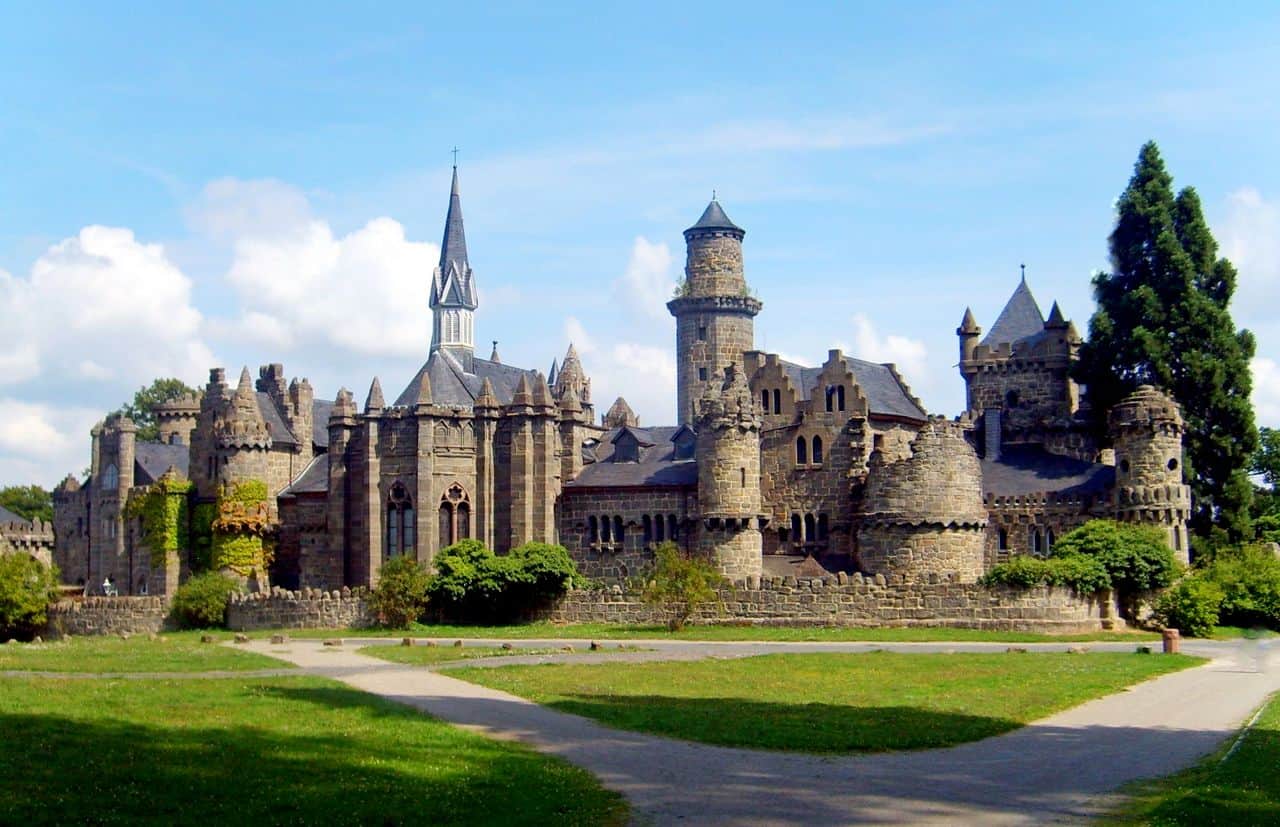 From the ruins that have been preserved to its Baroque style interiors, the armoury and the Neo-Gothic chapel, not to mention the splendid outdoors, this castle offers lots to see. 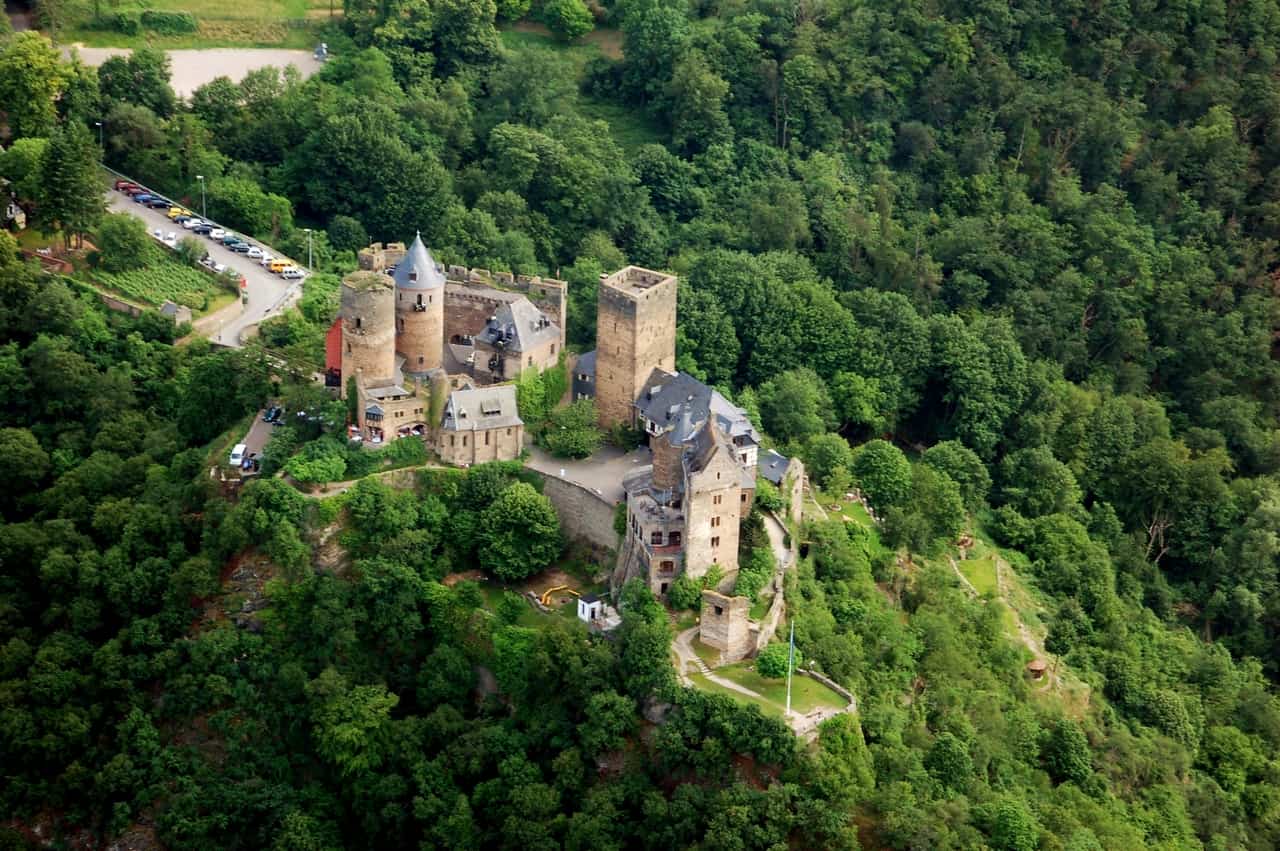 Today Schönburg Castle is a fancy hotel-restaurant located in the UNESCO World Heritage site above the medieval town of Oberwesel, perfect for the foodies out there. The menu is delectable and their breathtaking views of the Engehöller Valley make it a culinary experience of its own. The building itself has quite a special history attached to it. 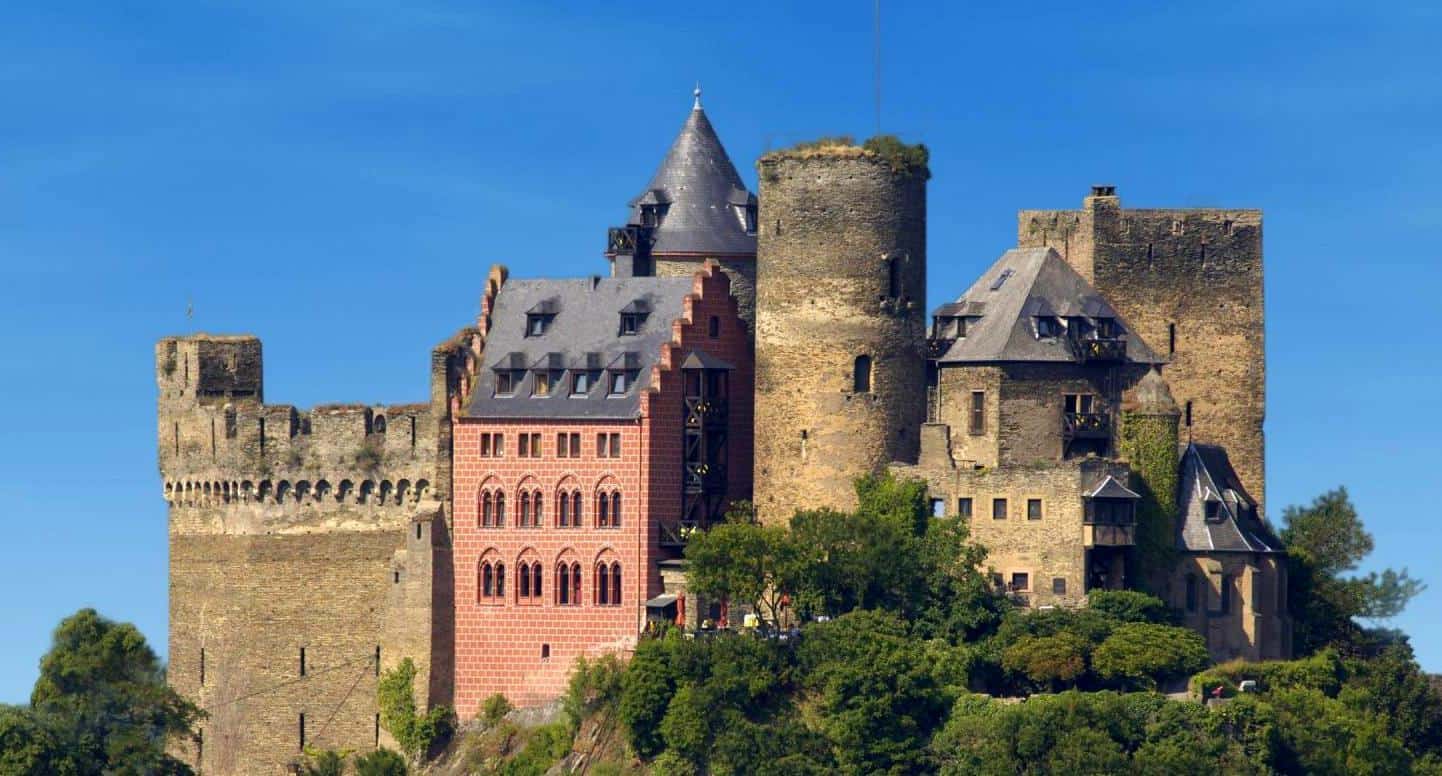 It was first built in the early 900, was destroyed in 1689 during the War of the Grand Alliance by French soldiers. It remained in ruins for roughly 200 years when a German-American family restored it, the town council eventually took ownership and since 1957 it is leased to the Hüttl family. 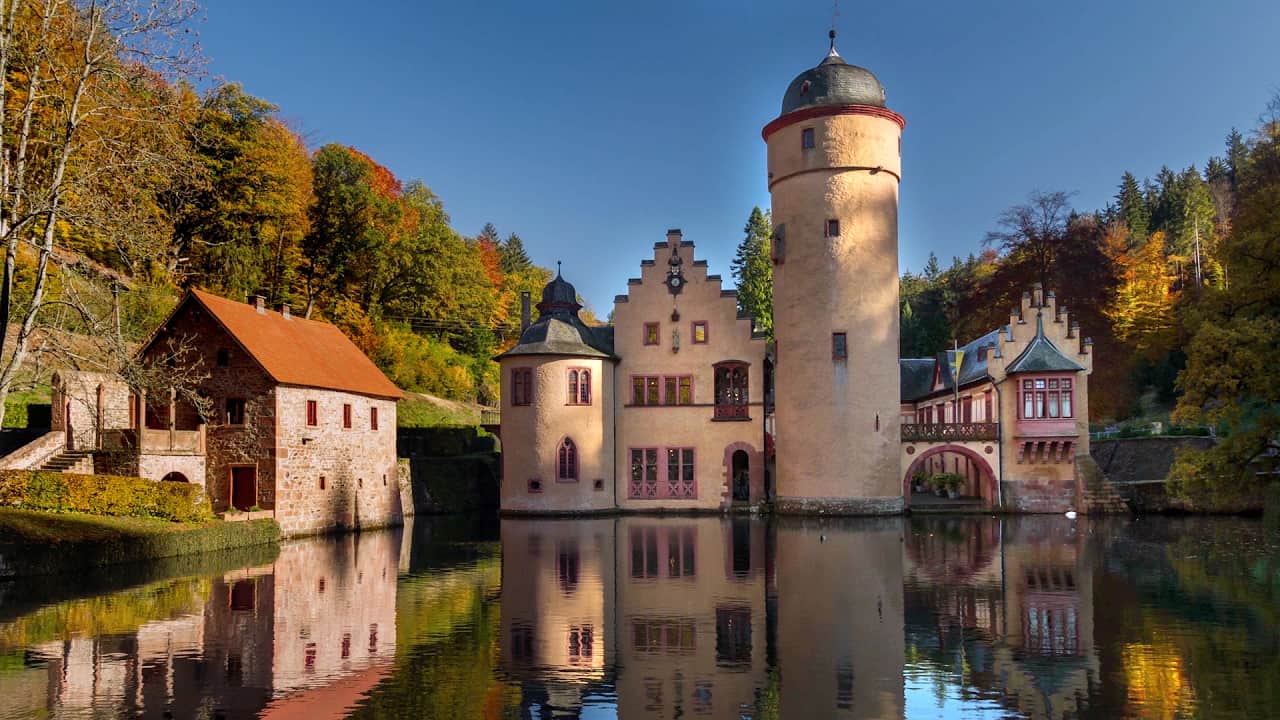 About an hour drive from Frankfurt, this late-medieval/ early-Renaissance castle is a photographer’s dream. The area around the Mespelbrunn Castle is surrounded by woods and the castle sits on a picturesque lake. 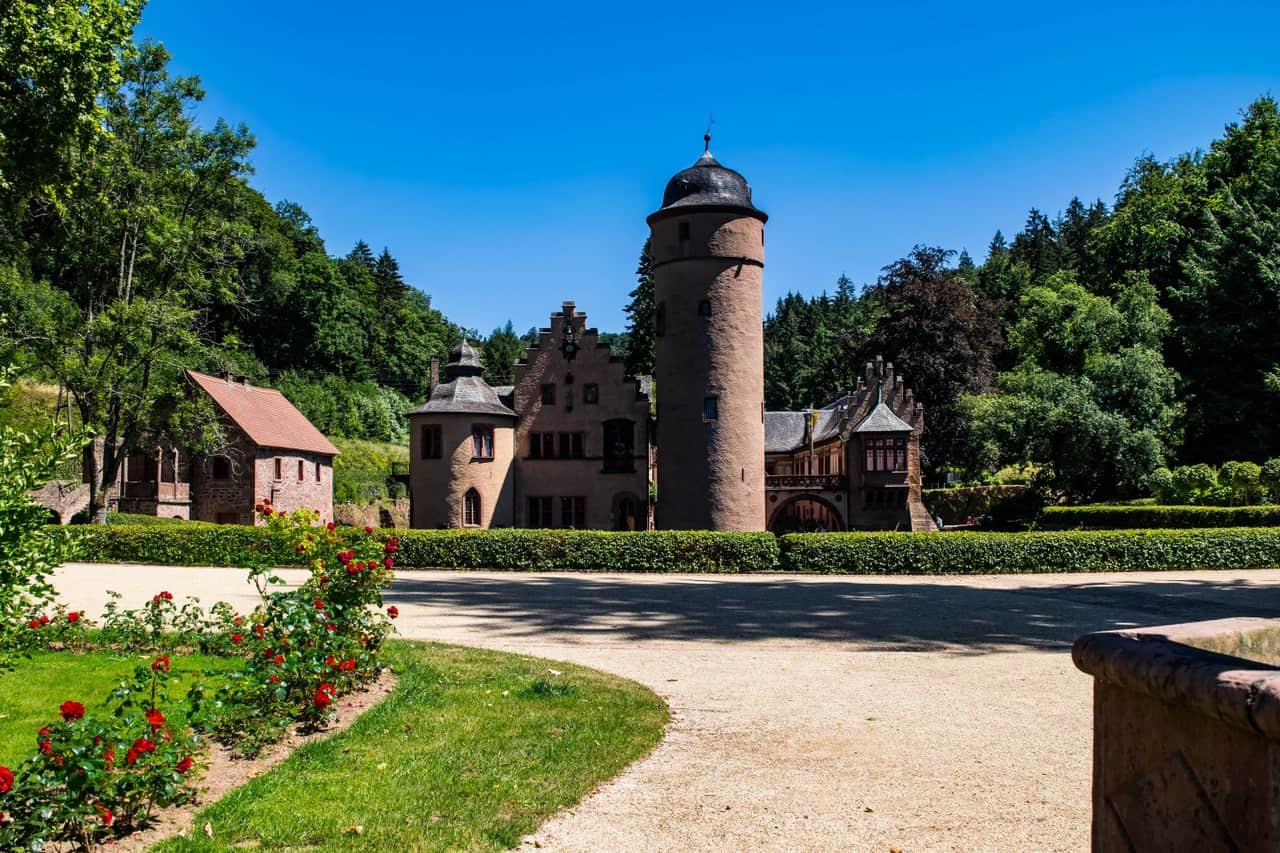 As of today the family of the Counts of Ingelheim are the owners who still live on-site. 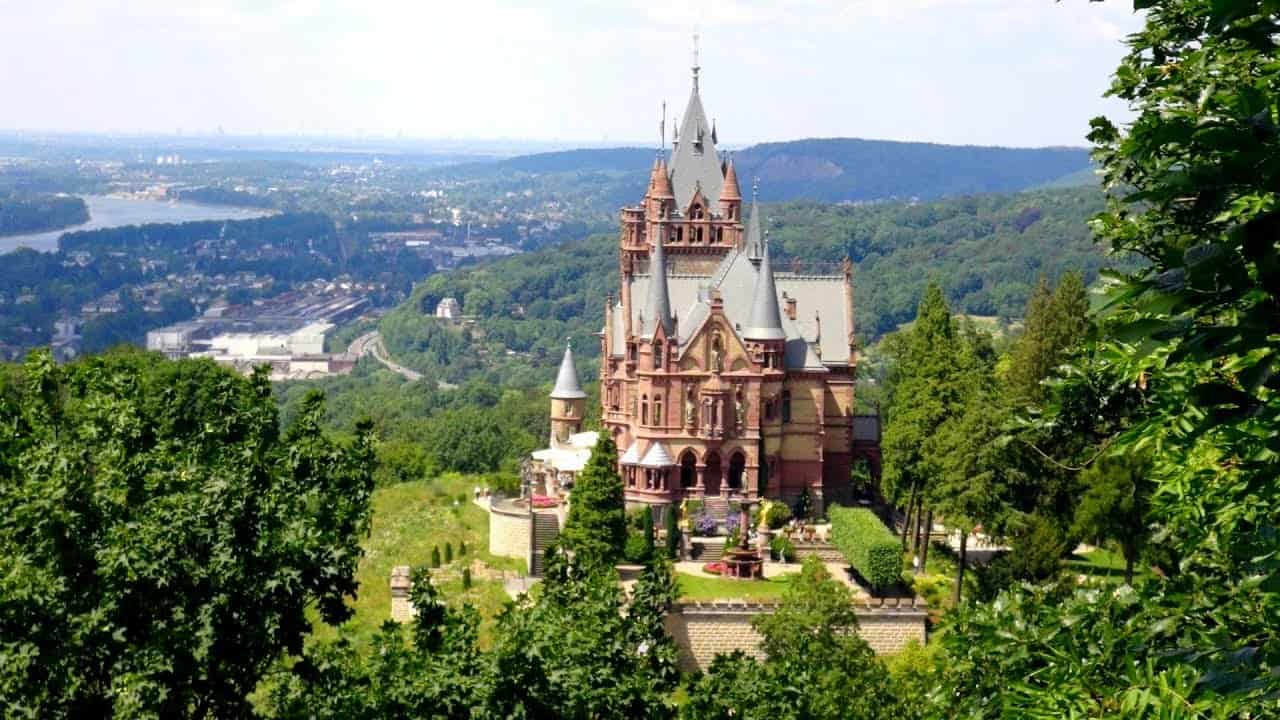 This late 19th century private villa/castle, situated about 20 minutes from the city of Bonn and 40 minutes from Cologne has a very interesting history. If you believe in dragon tales, this one for sure will capture your attention. Siegfried, hero of Nibelungenlied apparently slayed the dragon Fafnir on those hills, and bathed in his blood to become invulnerable. 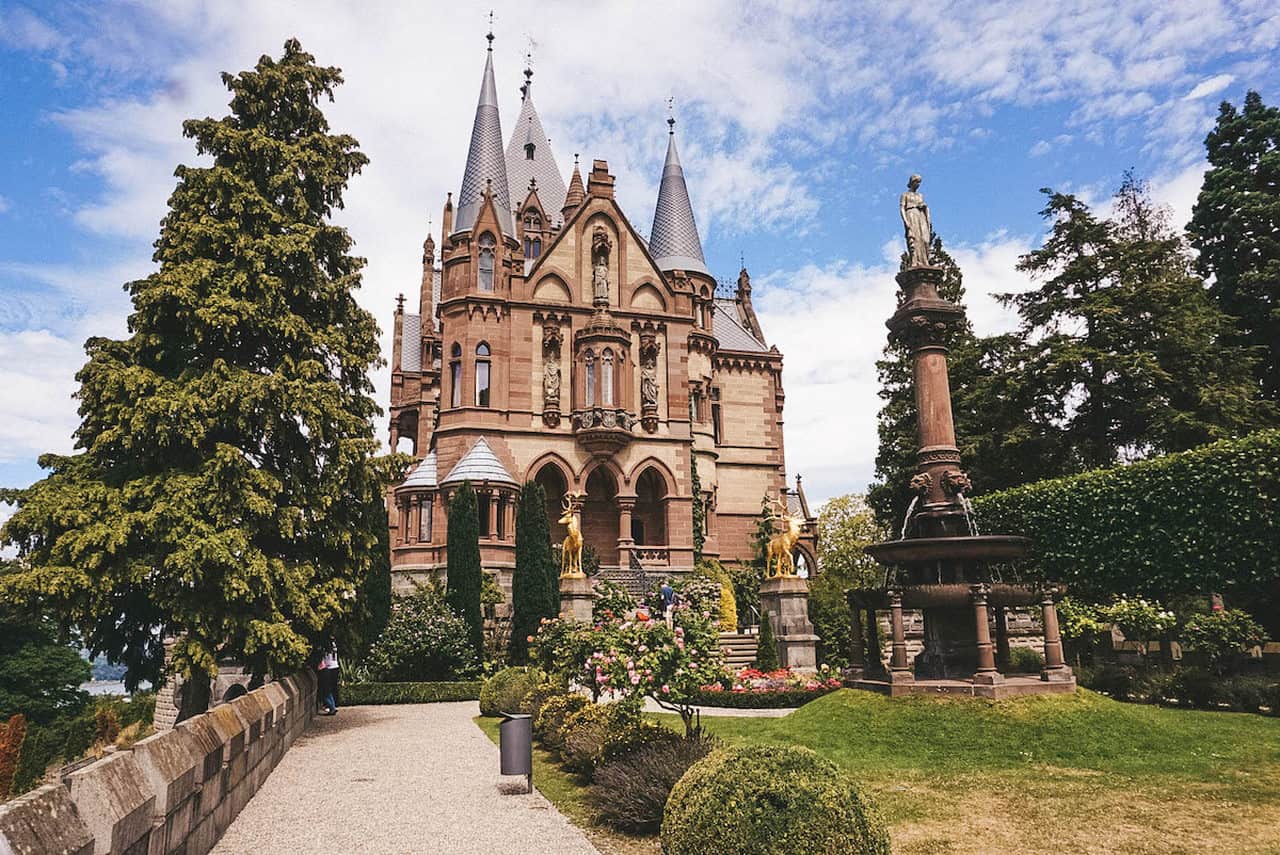 Today, the castle is fully restored and opened to the public on the weekends. Its architecture is unique and it deserves to be ranked one of the most famous castles in Germany. 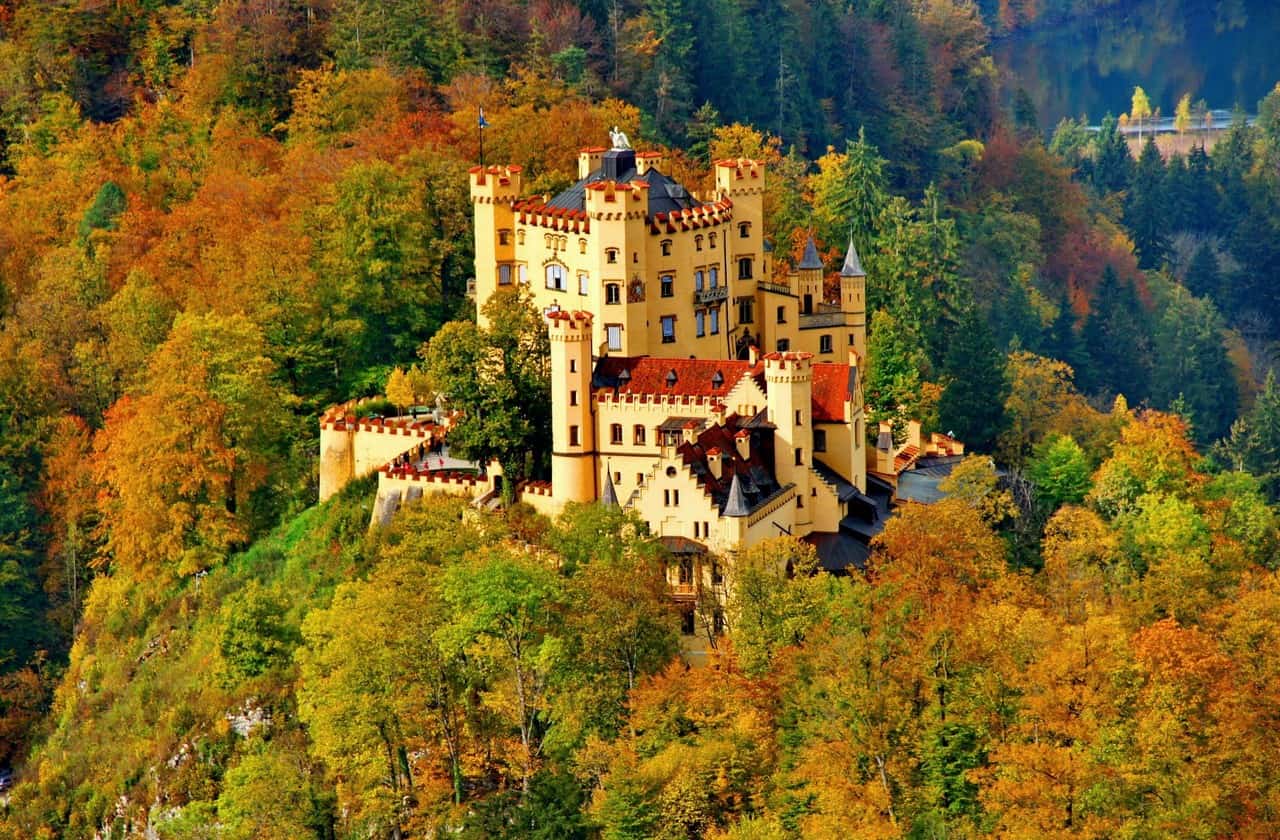 Hohenschwangau Castle is not only one of the most beautiful castles on this list, but the surrounding area is truly breathtaking as well. It is situated in the county of Ostallgäu in southwestern Bavaria close to the Austrian border. 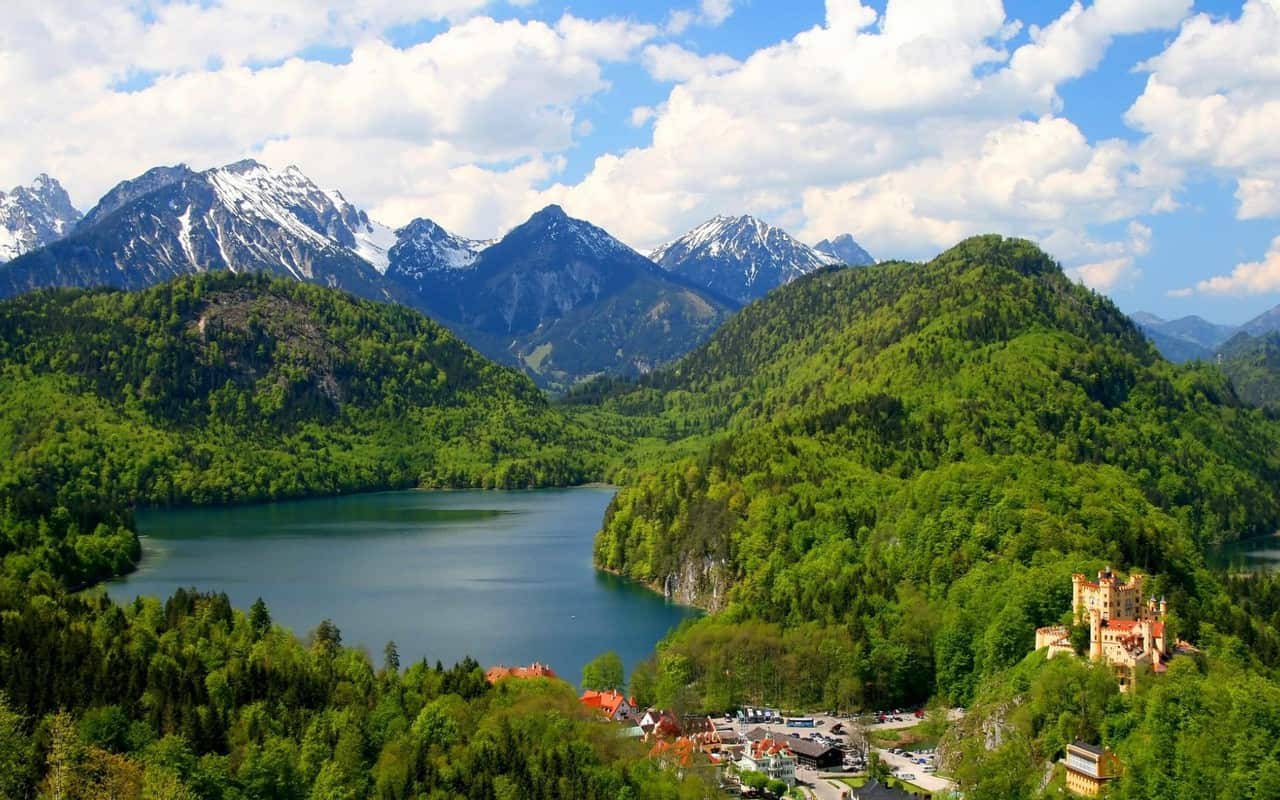 King Ludwig ll of Bavaria resided in this palace in the late 19th century. His father King Maximilian ll rebuilt and redecorated it in a Gothic Revival style which is preserved today. 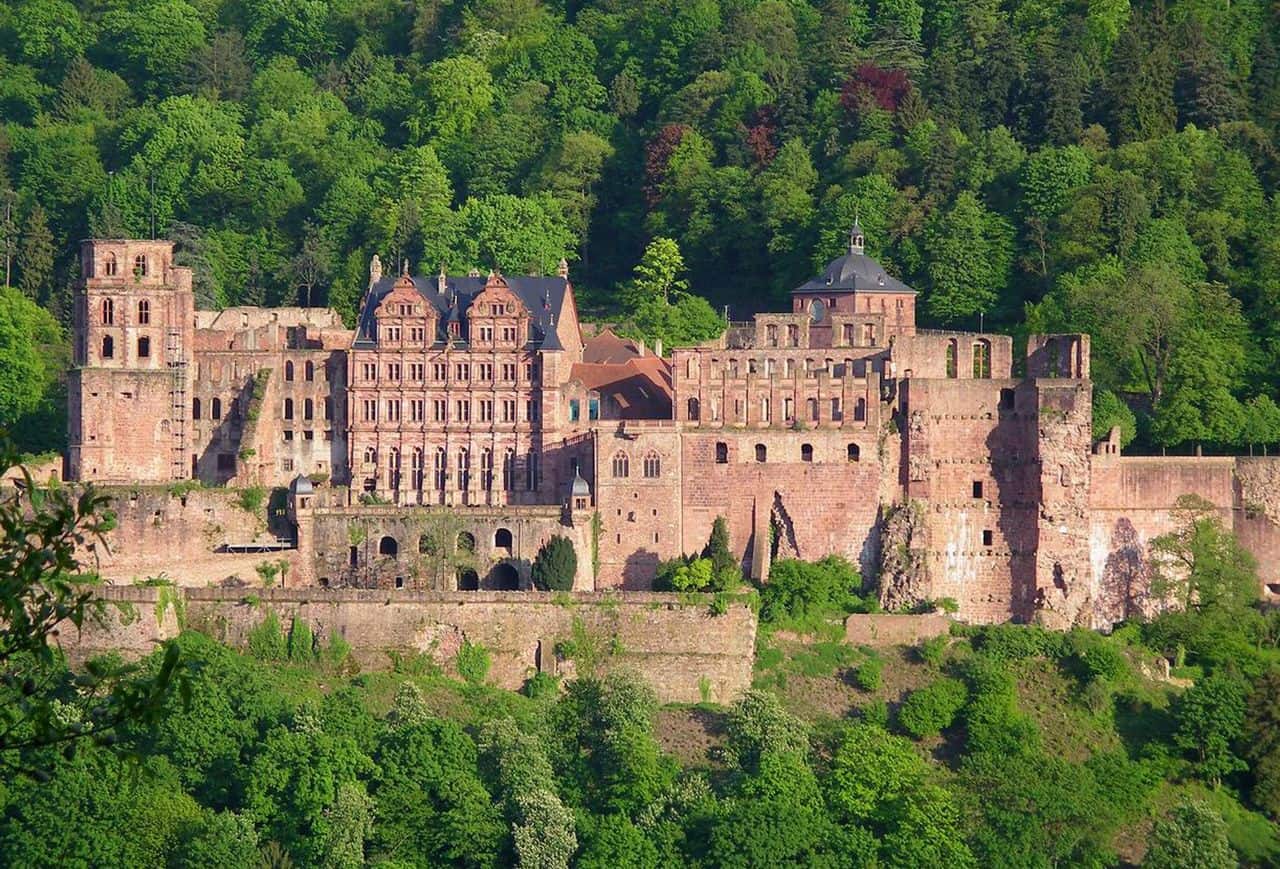 If you’re interested in guided tours of the courtyard, terrace and surroundings, as this is one of the most popular palaces to visit in Germany it is recommended you book your visit in advance. For the interior of the palace tickets are available on site. 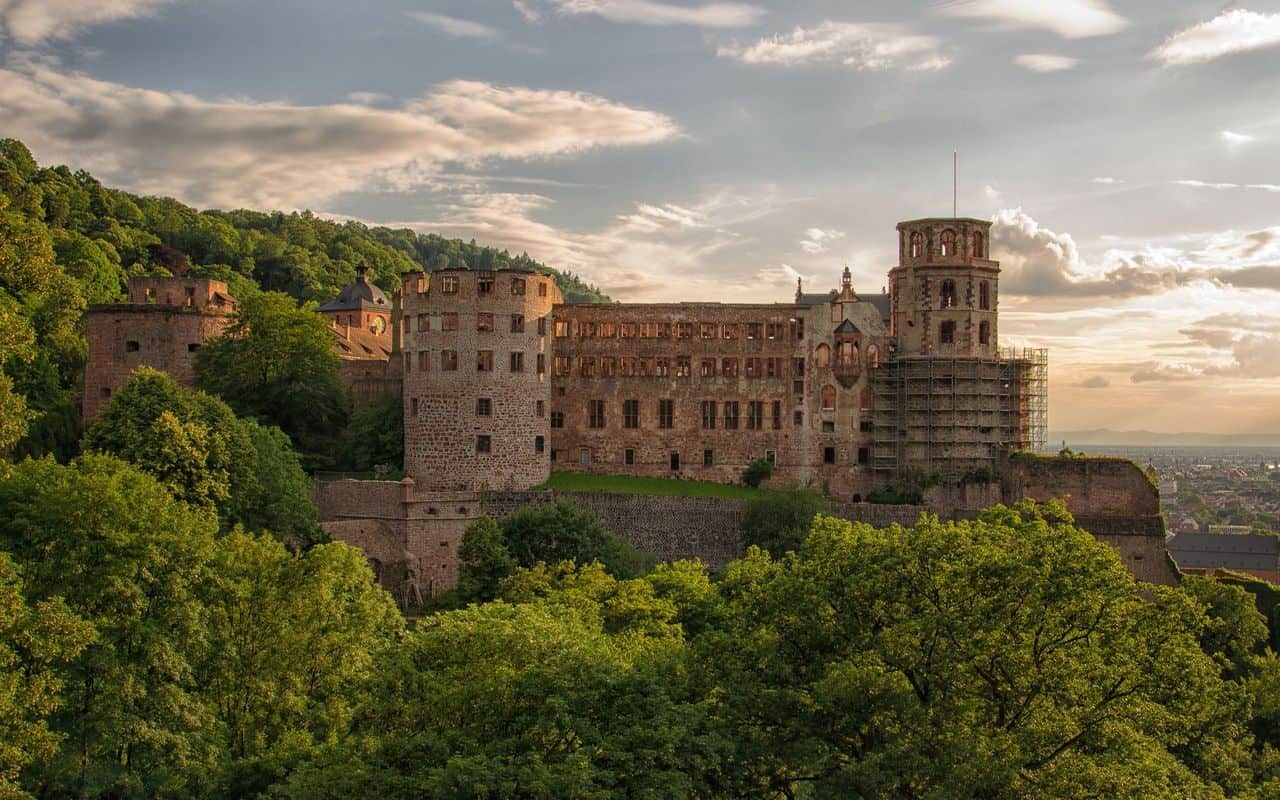 What makes this castle so popular with tourists? It was built in the early 1200s but was struck by lightning in 1537 and never fully recovered. It still sits on partial ruins, even though the castle was expanded by 1650. In 1764 another lightning bolt destroyed some of the rebuilt sections. 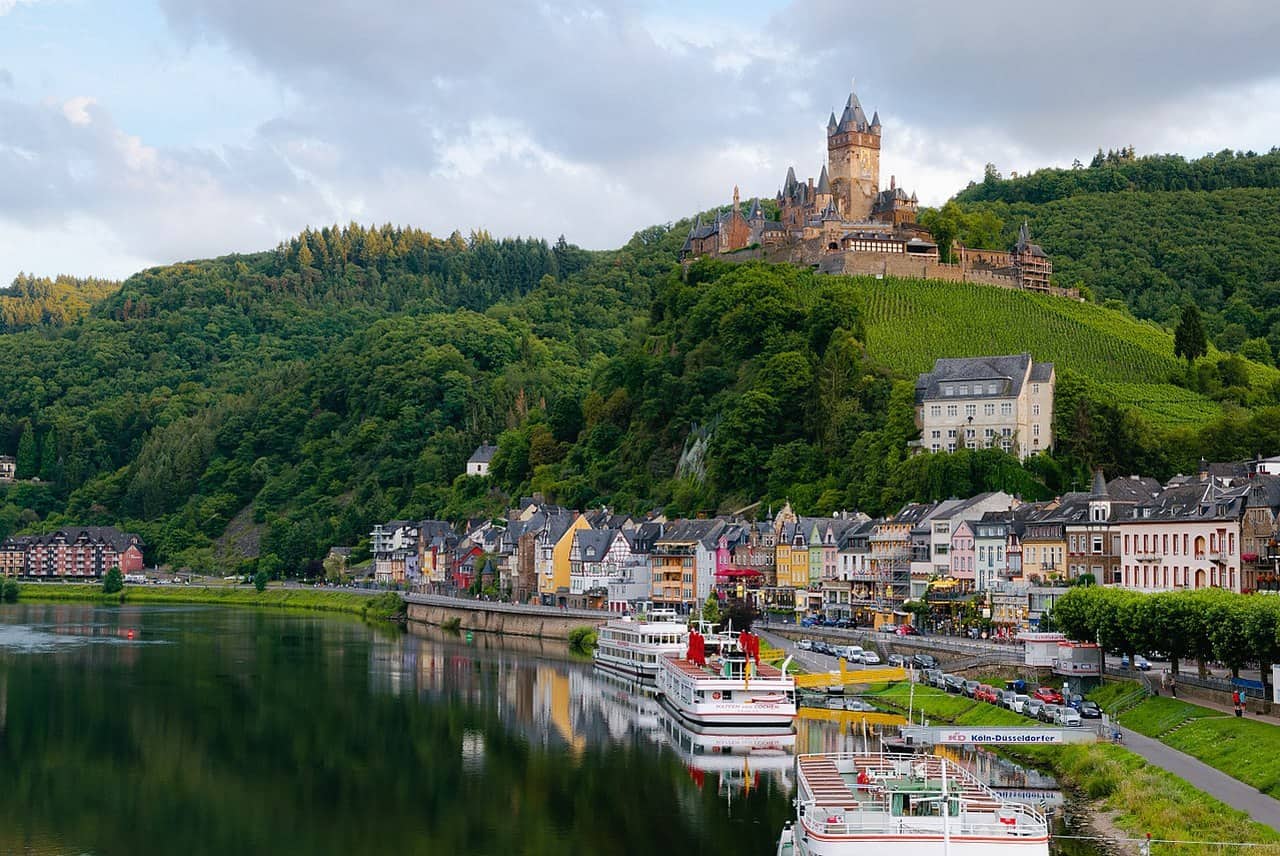 This Imperial Castle thrones over the Mosel River valley above the town of Cochem, and is one of the largest medieval castle in the surrounding area. If you crave a cultural tour, this is the site you want to visit. 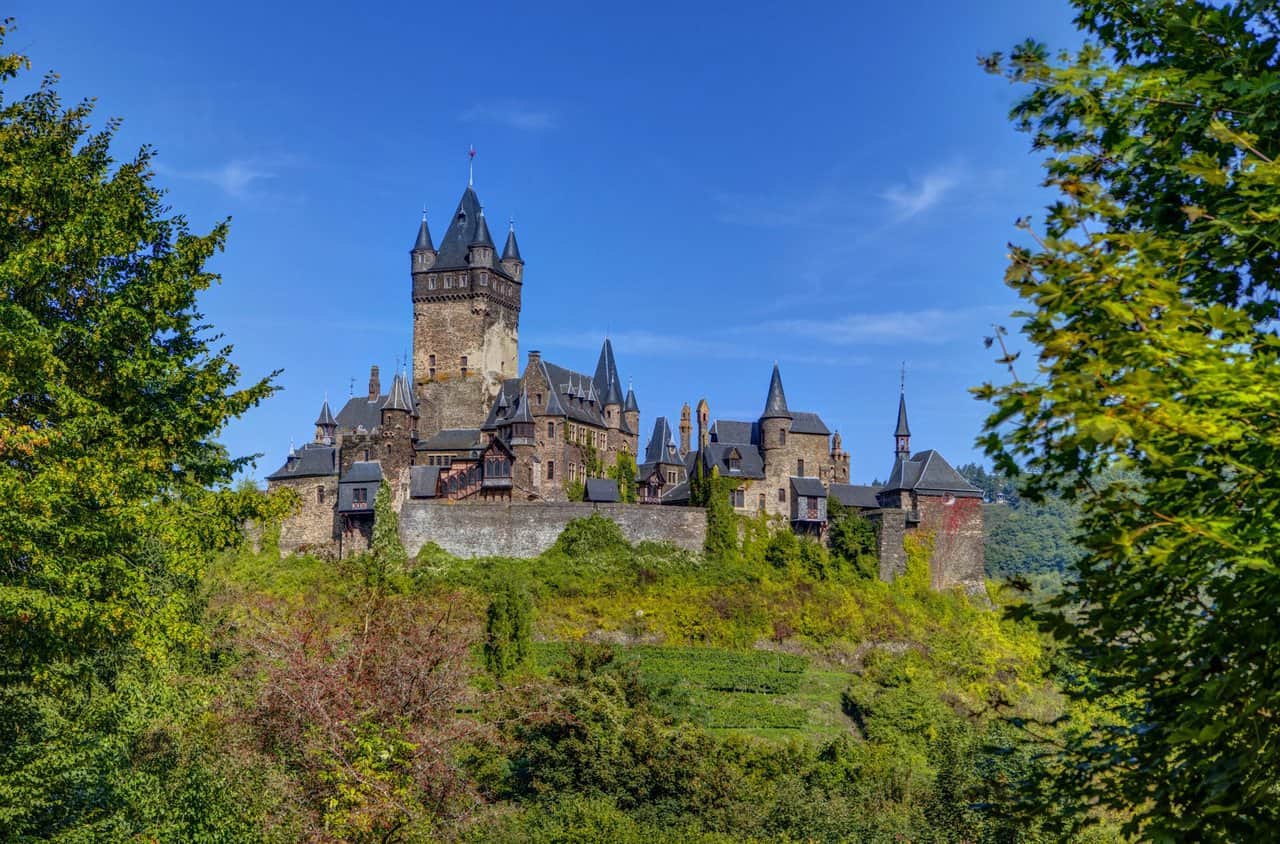 During the summer, there are lots of events which immerse the visitors into medieval life, but at Christmas there is a special ‘Cochem Castle Christmas’ with traditional preparations and festivities. 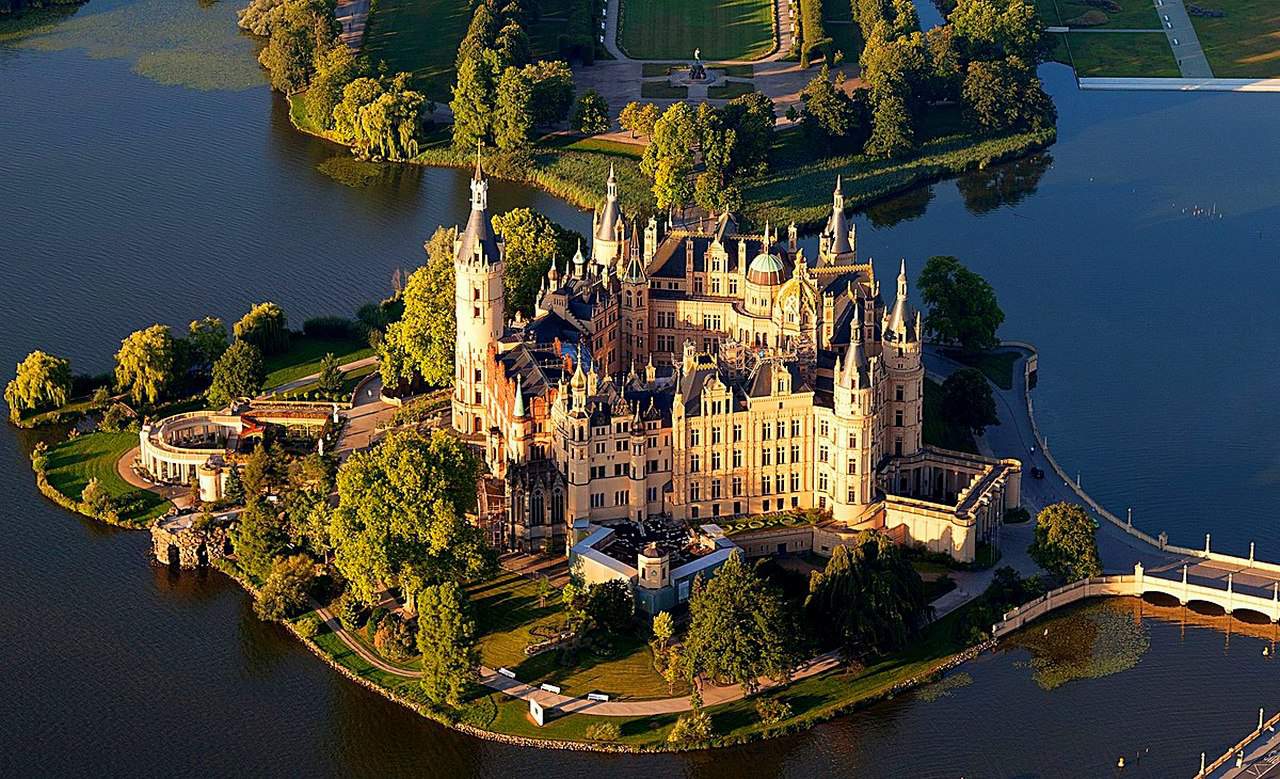 Since 1857 Schwerin Castle is state owned, but before that it housed dukes and grand dukes of Mecklenburg. It is an old castle which dates back to the early 900s, but more records can be found from the 1800s on. 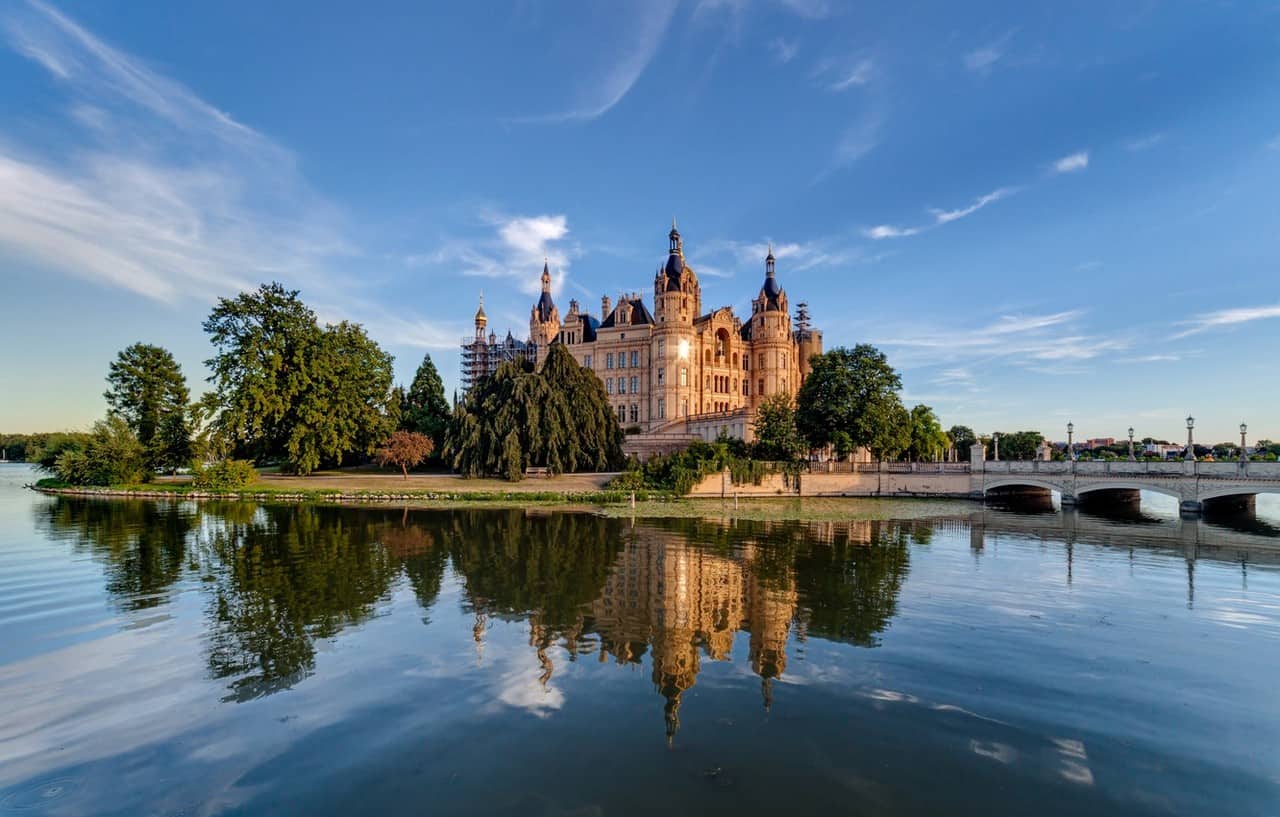 Throughout the centuries many restorations were done, and only parts of the building dating back to the 16th and 17th centuries were retained. This beautiful piece of architecture is surrounded by lakes and forests in the northern part of Germany.

This Gothic Revival castle is privately owned and is located in southern Germany, about an hour drive from Stuttgart. Lichtenstein Castle is full of history dating back to the years 1100. It was destroyed at least twice and rebuilt in the 14th century about 500 metres from the ruins. 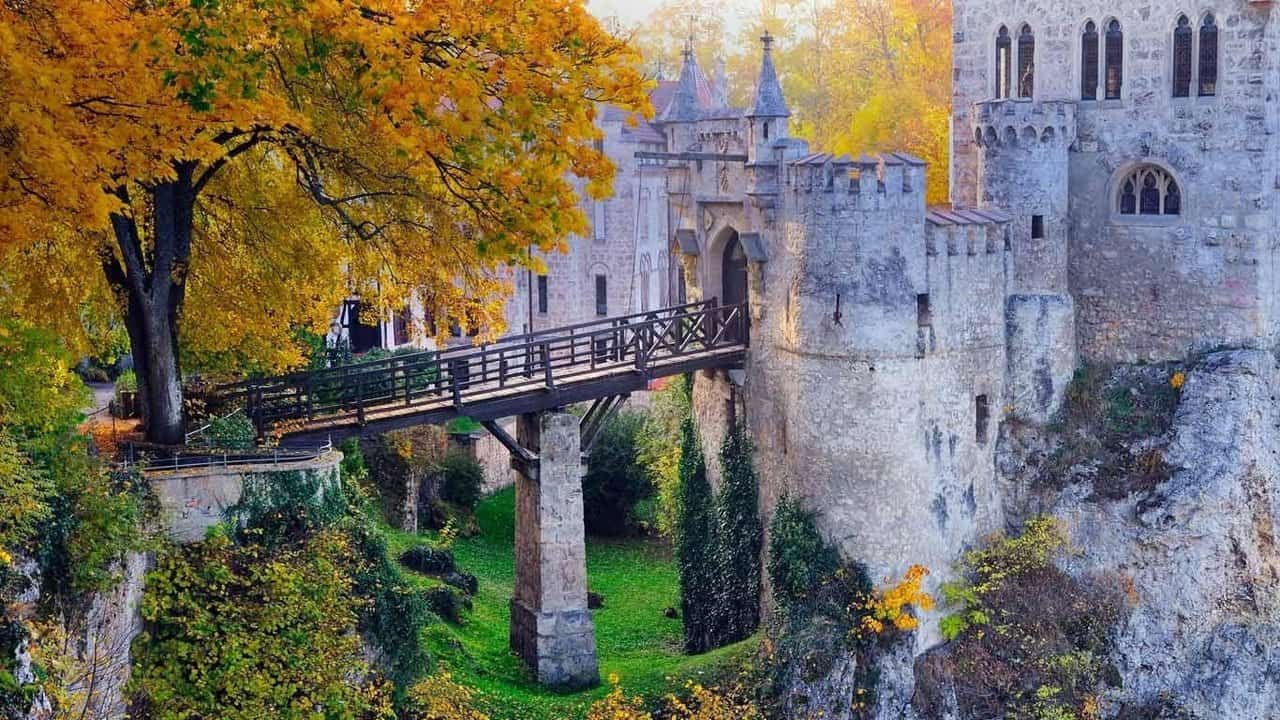 It has been passed on through many hands throughout the centuries and has been through countless restorations. Its rich history is probably the reason why it is one of the most popular castles in Germany. 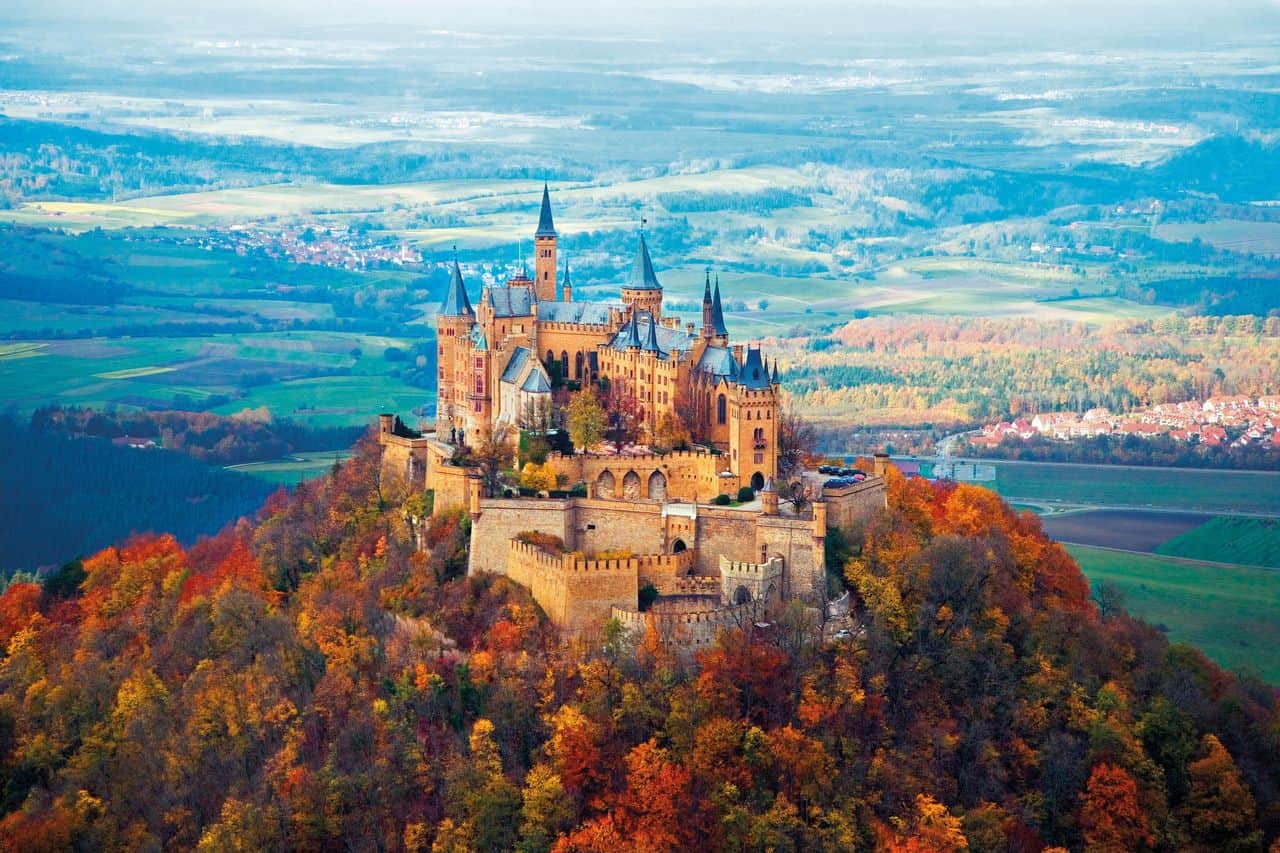 Another privately owned castle, Hohenzollern Castle is sitting pretty on top of Mount Hohenzollern, about an hour southwest of Stuttgart. It was originally built in the 11th century and it also survived several rebuilding and restorations. 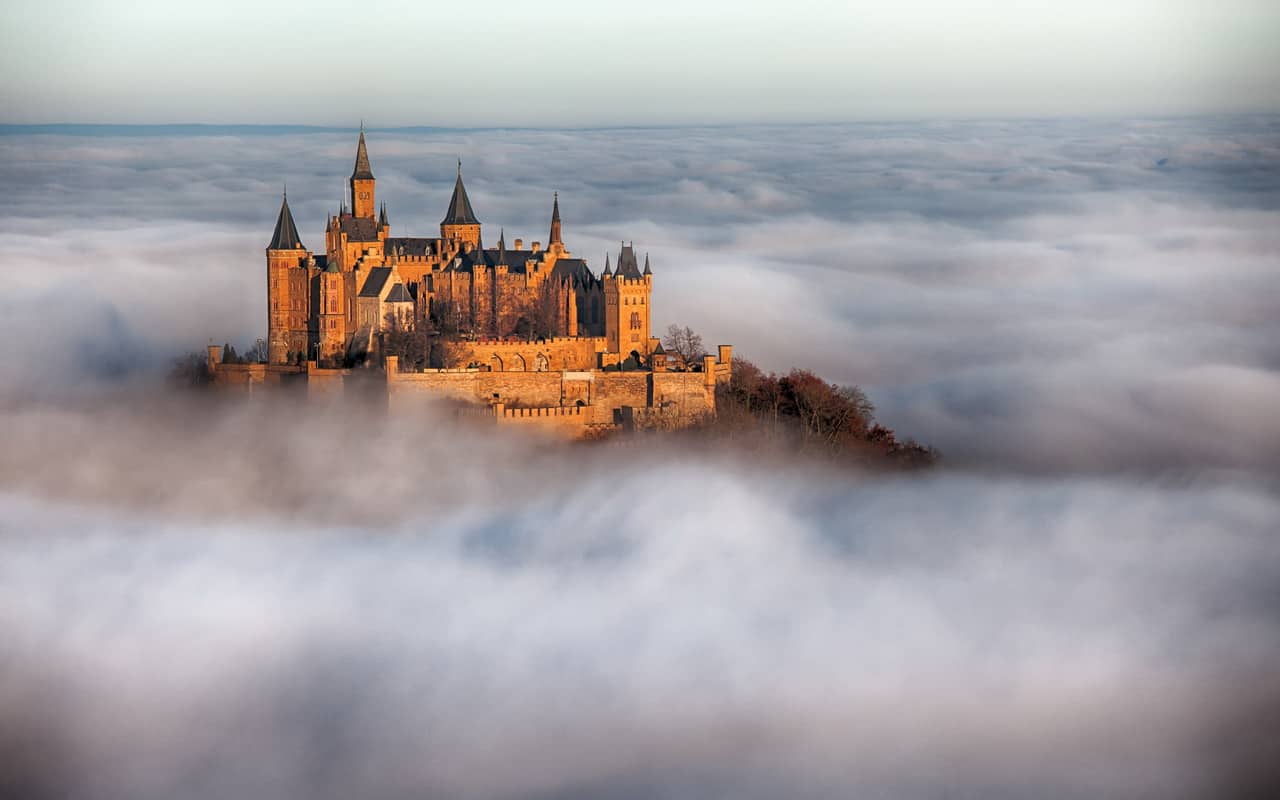 The last one dates back to 1867, and architect Friedrich August Stüler got his inspiration from the English Gothic Revival architecture and the Château of the Loire Valley. It is a must-see not only for its architecture but also for the panoramic views it offers. 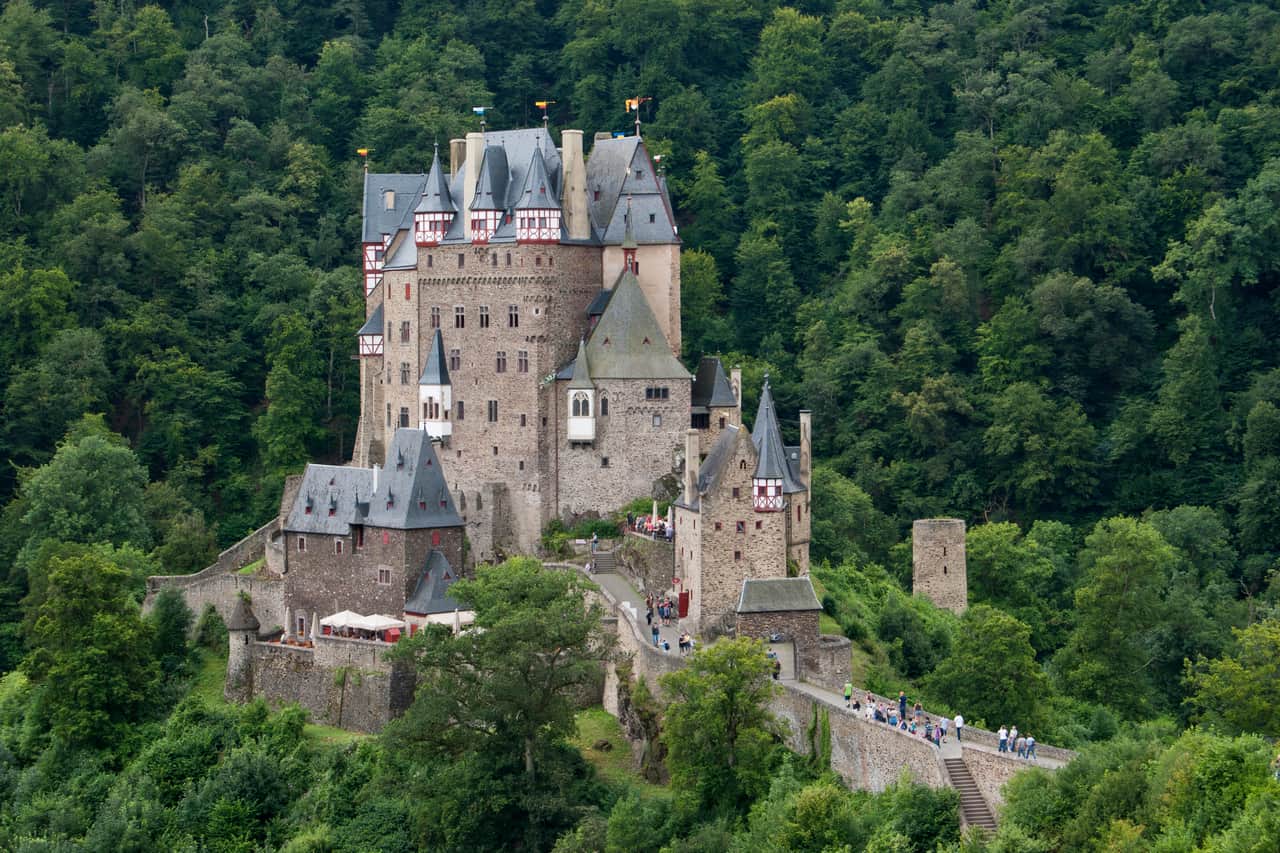 Burg Eltz, or Ganerbenburg is a castle which belongs to several heirs descendants of the Elz family. This hill castle is very well preserved in the Romanesque and Baroque architectural style. 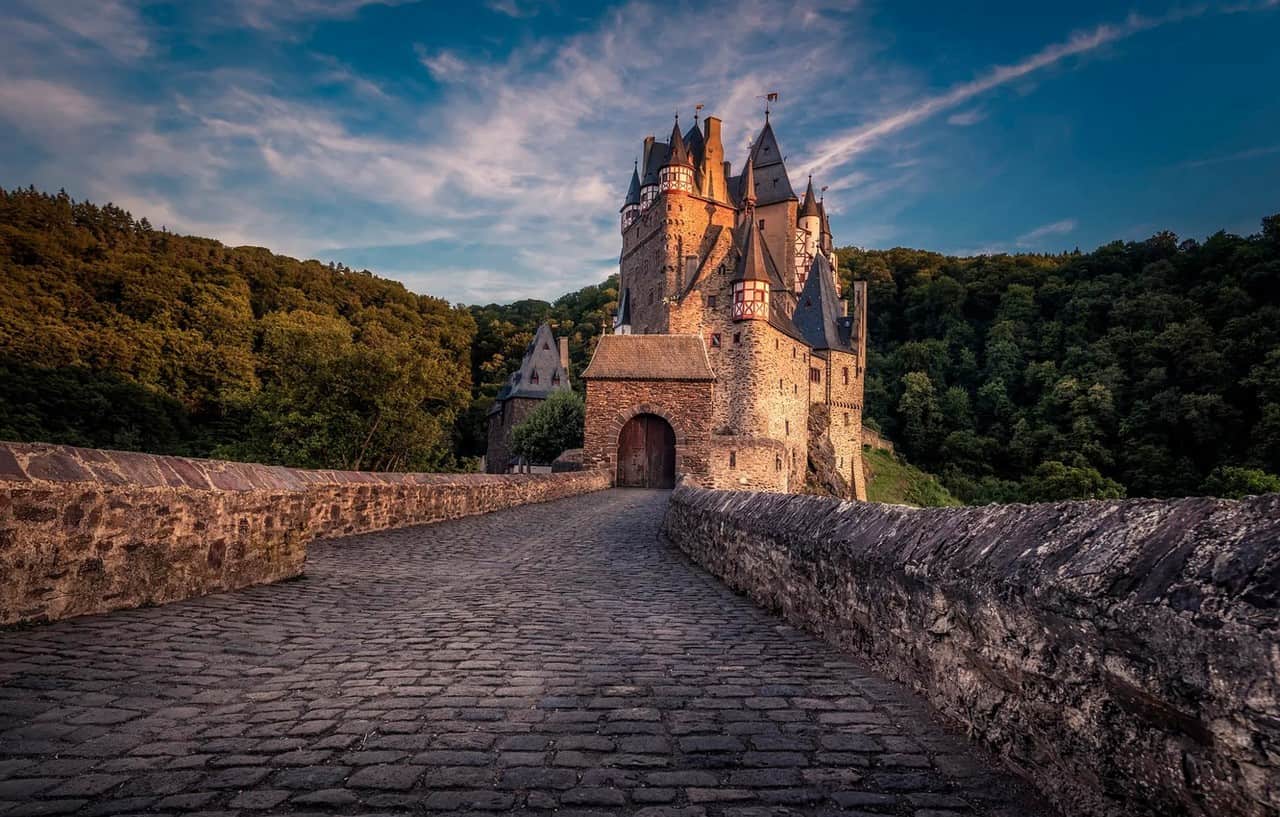 Two thirds of the castle are open to the public and the third is being used by a branch of the family as their private residence. It is a grandiose palace worthy of a visit. 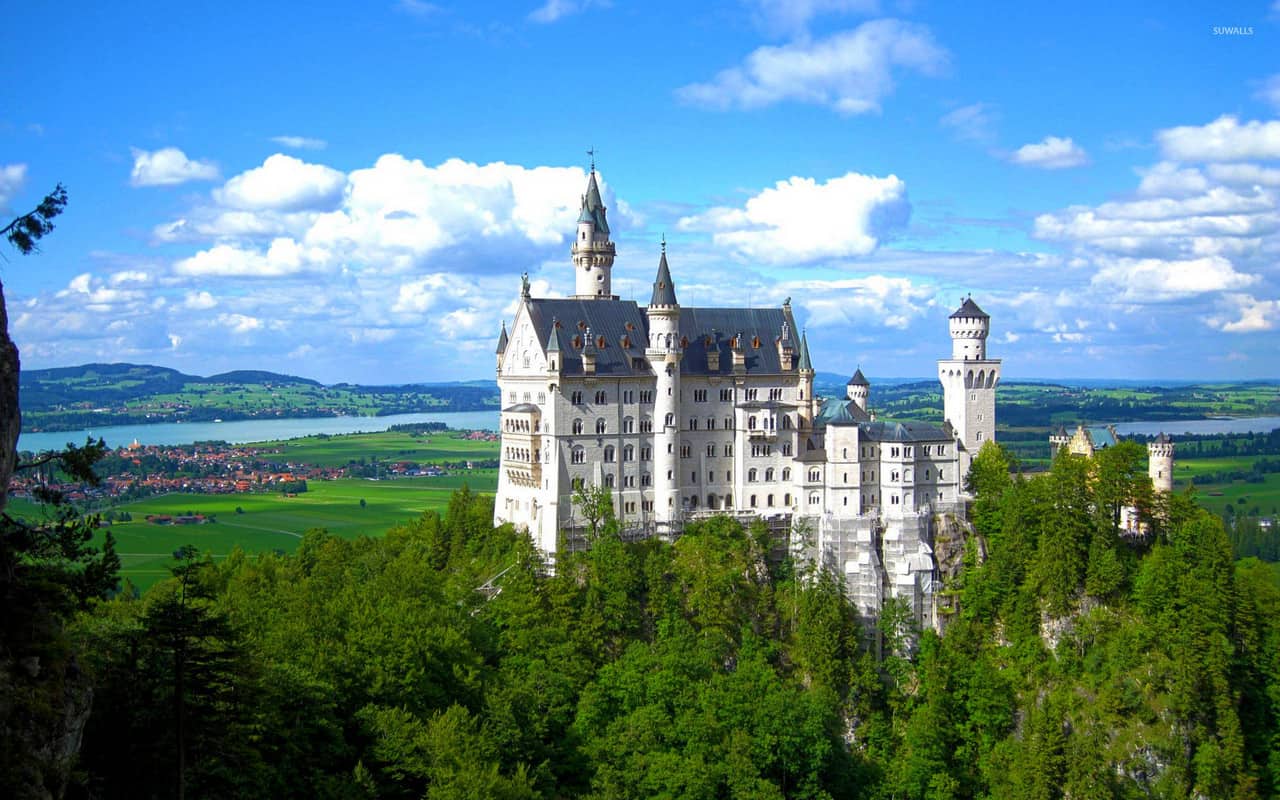 This idyllic 19th century Romanesque Revival palace is situated near Füssen in the southwestern part of Bavaria. King Ludwig ll of Bavaria payed and built this palace out of his personal funds in honour of Richard Wagner, but today it is state owned. It really is a breathtaking piece of architecture which inspired the castle in the Disney movie Sleeping Beauty. 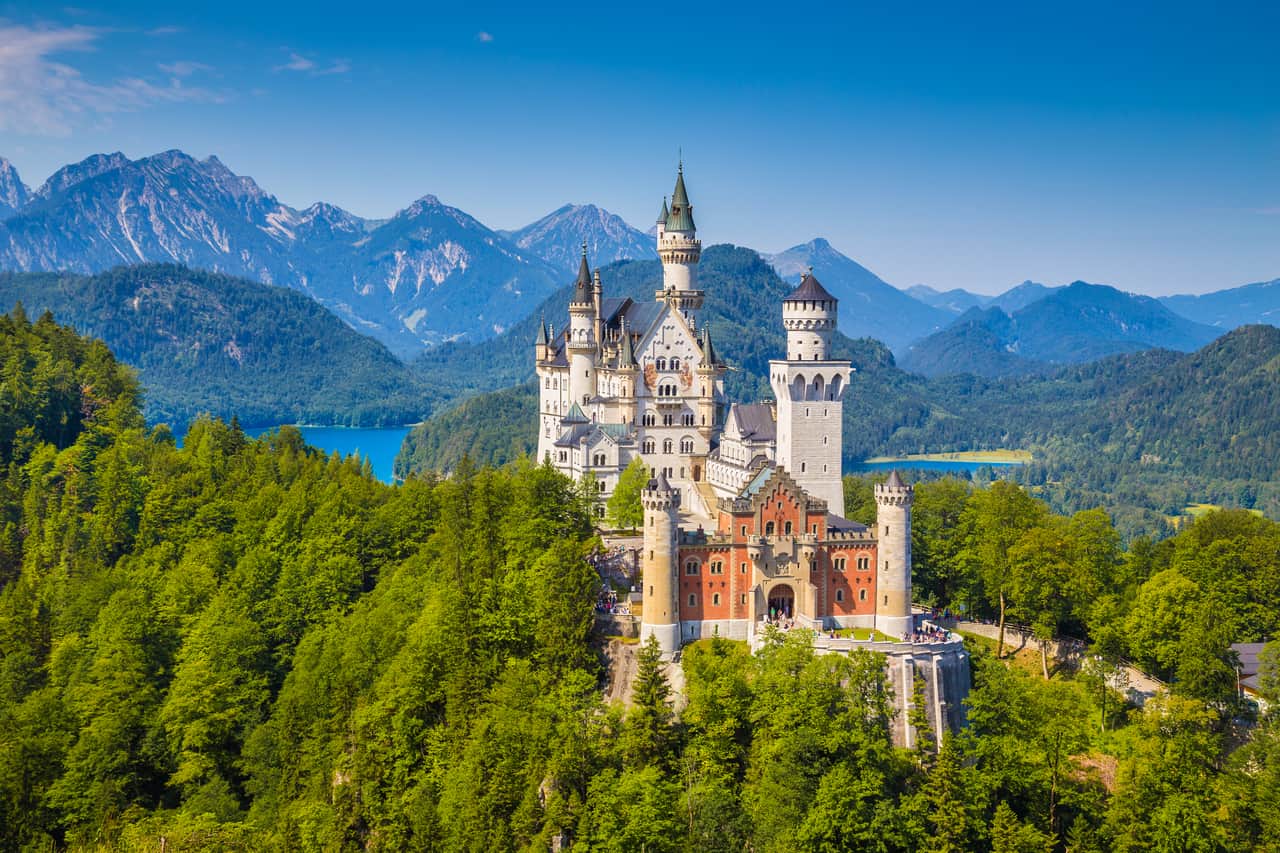 Since it is a very popular attraction, their rules concerning guided tours and photographs are strict, so beware of that when planning your visit, but definitely worth it.

This is a guide meant to facilitate the endless possibilities of beautiful castles to visit in Germany. It can definitely get overwhelming, but depending what your itinerary is you are bound to find one on your next trip.

The 10 Best Winter Boots for Men this Season