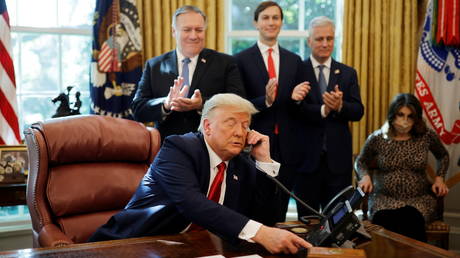 Sudan is joining the Abraham Accords and recognizing the state of Israel, US President Donald Trump has announced. It is the third country in three months to do so, following the United Arab Emirates and Bahrain.

Following a phone call with Israeli PM Benjamin Netanyahu and Trump on Friday, Sudanese PM Abdalla Hamdok and head of the Sovereignty Council Abdel Fattah al-Burhan announced they would “end the state of belligerence” with Israel and start the process of normalizing relations.

BREAKING: Sudan and Israel announced today they decided to “end the state of belligerence” between them and start a process of normalization. The announcement came after a phone call between president TrumpPM Netanyahu, Sudanese sovereignty council head Burhan & PM Hamdok

Friday’s action is also symbolic, as it was in Khartoum that the Arab League adopted its 1967 resolution declaring “no peace with Israel, no recognition of Israel, no negotiations with Israel” as its guiding principle.

Sudan is the third country in three months to join what the Trump administration has termed the Abraham Accords, signed on September 15 at the White House between Israel, the UAE, and Bahrain – with hopes that more countries will eventually join in. It was the first Middle East peace deal since 1994, when Jordan first recognized Israel.

Earlier this week, Trump announced that the US would be removing Sudan from the list of state sponsors of terrorism, as soon as the North African country pays out $335 million in compensation to victims of Al-Qaeda attacks on US embassies. The designation dates back to 1993, early in the 30-year rule of President Omar al-Bashir.

After al-Bashir was deposed last year in a military coup, the Sovereignty Council was established to lead a transitional government. The majority-Muslim nation also went from being governed by Islamic law to being an officially secular state.

Also on rt.com
US’ planned removal of Sudan from terrorism list is really an attempt to reduce Chinese influence and further isolate Iran