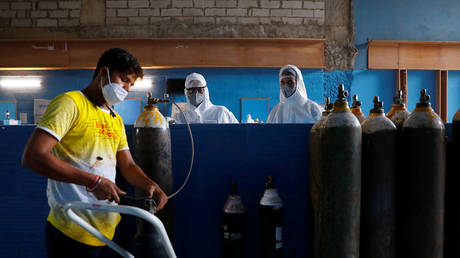 An oxygen support machine caught fire at a coronavirus field hospital in a Mumbai neighborhood. Medics were able to put out the flames and no one was hurt in the accident.

Clad in personal protective gear, one medical worker is then seen rushing to the patient’s bed. Although initially startled, the nurse remained remarkably calm and was quickly aided by colleagues. One medic poured liquid on the fire, extinguishing the flames, and the power was cut off promptly from the machine. No one was hurt in the incident, according to local media reports.

Earlier this month, an 82-year-old Covid-19 critical patient at another Mumbai hospital died while being shifted, as the ventilator he was connected to caught fire.

Another similar incident occurred last month at a hospital in Vadodara, also in India, after a ventilator went up in flames at that facility’s Covid-19 ward. One patient had to be lifted up by medical personnel and evacuated as smoke and flames poured out from the machine.