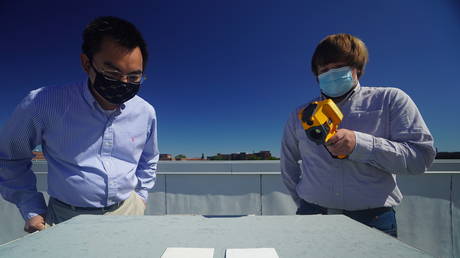 Engineers have created a paint capable of reflecting 95.5 percent of sunlight back into space, while keeping a building cooler than the ambient temperature, which might one day dramatically reduce the need for air conditioning.

“It’s very counterintuitive for a surface in direct sunlight to be cooler than the temperature your local weather station reports for that area, but we’ve shown this to be possible,” said Xiulin Ruan, a professor of mechanical engineering at Purdue.

It’s both abrasion resistant and waterproof, and absorbs almost no solar energy, reflecting heat away from buildings and back out into space.

“We’re not moving heat from the surface to the atmosphere. We’re just dumping it all out into the universe, which is an infinite heat sink,” said the study’s co-author Xiangyu Li.

At present, widely available heat-rejecting paints reflect up to 90 percent of sunlight, but cannot achieve temperatures below ambient levels.

The Purdue researchers say their paint reflects 95.5 percent of sunlight while efficiently radiating infrared heat, according to their paper published Wednesday.

The paint took six years of research and development to produce, drawing on decades of existing studies stretching back to the 1970s.

The Purdue team began with 100 material combinations, before narrowing them down to 10, of which 50 variations were produced in each case. They eventually settled on one made primarily from calcium carbonate – an abundant resource found in rocks and seashells around the world.

The calcium carbonate within the paint absorbs almost no ultraviolet rays, due to both its atomic structure and its physical structure, which is made up of highly concentrated but different-sized particles that scatter a wide range of radiation wavelengths.

The as-yet-unnamed paint is essentially the opposite of the world-famous Vantablack, the blackest material known to humanity, which can absorb 99.96 percent of sunlight.

The Purdue paint is cheaper to produce than commercial alternatives, say the research team, and would save roughly a dollar a day on air conditioning for a one-story house measuring 1,076 square feet.

The researchers also claim that, were this paint to be applied to surfaces such as roads, rooftops, and car roofs, the planet’s surface could be cooled. They say the paint could also help reduce global carbon emissions by cutting the demand for air conditioning, which is primarily powered through the burning of fossil fuels.