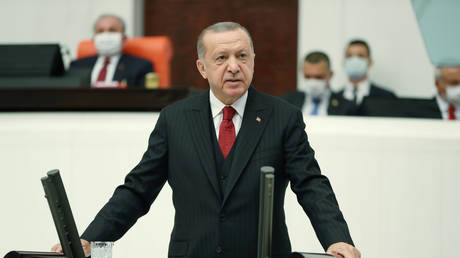 Turkish President Recep Tayyip Erdogan has slammed France’s Emmanuel Macron and other European leaders, labelling his counterparts ‘fascists’ and champions of Islamophobia who were taking part in a “lynch campaign.”

Erdogan continued his war of words with Macron following the French president’s hardened comments on radical Islam in the wake of the beheading of teacher Samuel Paty in Paris. Speaking from the Presidential Palace in Ankara on Monday, Erdogan said that Macron was encouraging Islamophobia on an immense scale and indicted other European heads of state for their part.

Muslims are now subjected to a lynch campaign similar to that against Jews in Europe before World War II.

“European politicians must now say ‘stop’ to the hate campaign led by Macron,” Erdogan added before turning his attention to German Chancellor Angela Merkel, questioning how there could be religious freedom in Germany after a police raid on a mosque in Berlin.

Whilst heaping the bulk of the blame on Macron, the Turkish President took aim at other Western leaders, claiming these “attacks have become policy at head of state level, I’m calling out from here, you are fascists, you are the link in the chain of the Nazism.”

Erdogan also reiterated his previous remarks concerning Macron’s mental health, asserting that the French President was in need of “mental control.” He also called for a boycott of French goods.

Also on rt.com
Erdogan urges Turks to not buy French goods as companies brace for boycott by Muslim nations

Erdogan is not the only Muslim leader to pick a fight with Macron over his stance on Islam.

On Sunday, Pakistan’s Prime Minister Imran Khan said that the French President had “chosen to encourage Islamophobia by attacking Islam rather than the terrorists who carry out violence, be it Muslims, White Supremacists or Nazi ideologists.” Khan also published a photo of his letter to Facebook CEO, Mark Zuckerberg, asking him to ban Islamophobic content.

Macron prompted outrage after declaring that Islam is “in crisis” following the killing of Paty last month. He also accused Islam of “separatism” and said he would not renounce the Muhammad caricatures published by the Charlie Hebdo magazine as he underlined his commitment to free speech.

Morocco’s foreign ministry also condemned the continued publication of cartoons of the prophet, which were projected onto some local French government buildings. The Moroccan statement said the action reflects “the immaturity of their perpetrators and reaffirms that the freedom of some ends where the freedom and beliefs of others begin.”

French products have already been removed from shops in Kuwait, Jordan and Qatar as the backlash against Macron’s comments gathers strength.