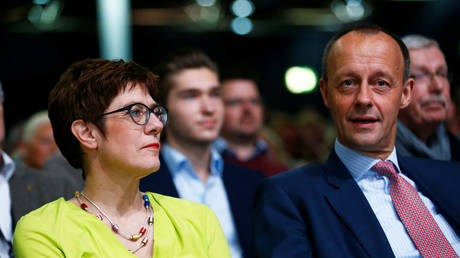 Germany’s Christian Democrats postponed a party congress scheduled for December, as candidate Friedrich Merz claims parts of the CDU establishment want to prevent him from becoming the new party leader.

The committee agreed it could not hold the meeting in Stuttgart amid the coronavirus pandemic, Ziemiak told reporters.

The current situation would not allow a party conference on December 4.

It’s unclear when the 1,001 delegates will be able to elect the new leader, who is likely to succeed Merkel as chancellor.

The chancellor has said she will not seek re-election in federal elections in October 2021. Her presumed successor, Annegret Kramp-Karrenbauer, also said in February she would stand down as CDU leader.

Ziemiak believes the CDU executive committee could decide on the next congress at its meeting on December 14 and a digital party conference is on the table, but “there is a consensus that a party conference with physical presence would be the best option.”

As a chancellor candidate, the new CDU leader would represent the conservative alliance of the party with Bavaria’s Christian Social Union (CSU).

Also on rt.com
Merkel will not seek re-election as CDU chair after Hesse election debacle

The main contenders for the CDU leadership include Friedrich Merz, Armin Laschet and Norbert Roettgen.

Merz, who narrowly lost to Kramp-Karrenbauer in 2018, had pushed for a vote in December and criticized the postponement as “a decision against the CDU rank and file.” The politician tweeted he regrets that his compromise proposal to hold a digital conference to elect the chairman was declined.

A one-time rival of Merkel, Merz also said that “there are considerable parts of the party establishment… that want to prevent me from becoming party chairman.”