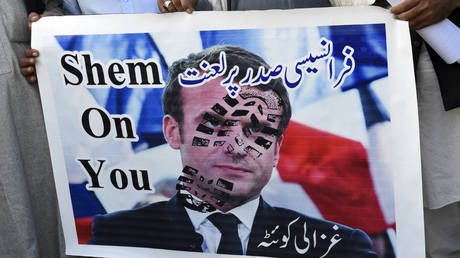 Angry rebukes of Emmanuel Macron continue to arrive from across the Muslim word. Iran and Saudi Arabia, which usually don’t see eye to eye, have condemned the French president’s remarks about Islam.

Macron drew the ire of Muslims with his comments in the wake of the murder of French teacher Samuel Paty. The man was beheaded over cartoons of the Prophet Mohammed which he showed students during a class on freedom of speech. The president said Paty “was killed because Islamists want our future,” adding that France will “not give up our cartoons.”

The Saudi Foreign Ministry on Tuesday said it rejects “any attempt to link Islam and terrorism” and denounced the cartoons as “offensive,” adding that it condemns any act of terrorism, “whoever committed it.”

We reject all practices and actions that generate hatred, violence and extremism and violate the values of coexistence and mutual respect among the peoples of the world.

On Tuesday, the Iranian Foreign Ministry summoned the French charge d’affaires over Macron’s remarks. Earlier on Monday, the comments were condemned by Iranian lawmakers and judiciary, while Foreign Minister Javad Zarif slammed what he called “colonial regimes” for exporting hatred and victimizing Muslims.

Muslims are the primary victims of the “cult of hatred”—empowered by colonial regimes & exported by their own clients.Insulting 1.9B Muslims—& their sanctities—for the abhorrent crimes of such extremists is an opportunistic abuse of freedom of speech.It only fuels extremism.

The French president was already criticized by top officials in many Muslim countries.

Turkish President Recep Tayyip Erdogan questioned Macron’s mental capacity and called for a boycott of French goods, a sentiment that was widely shared on social media in the Muslim world and already supported by several supermarkets.

Also on rt.com
Erdogan urges Turks to not buy French goods as companies brace for boycott by Muslim nations

How to get Shiny Goldeen and evolve into Seaking – HITC