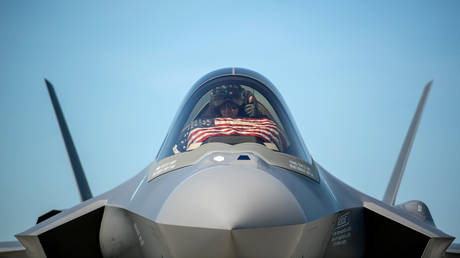 The Israeli government says it will not oppose the US selling “specific weapons systems” to the United Arab Emirates, in an apparent reference to F-35 fighter jets, despite Tel Aviv opposing such a deal less than a fortnight ago.

This is despite Israeli Intelligence Minister Eli Cohen saying less than two weeks ago that the country would oppose the sale of the fifth-generation US-made jets to Qatar.

Also on rt.com
‘Our region is not Switzerland,’ Israeli minister says amid concerns Qatar may buy F-35 jets from US

And only two months ago, Netanyahu himself voiced his opposition to the sale of the stealth fighters “to any countries in the Middle East.”

Netanyahu’s newly softened position on US military deals for his neighbors comes amid thawing relations between Israel and its Arab neighbours, guided by Washington. On Friday, Sudan became the latest Arab nation to normalise relations with Israel, while, last week, Tel Aviv established diplomatic ties with Bahrain in another US-brokered deal.

A statement from Netanyahu and Gantz was released on Friday after the defense minister returned from the US, where he signed a joint declaration on Washington’s “strategic commitment to Israel’s qualitative military edge.” The statement did not specifically mention F-35s, but said Tel Aviv would no longer oppose Washington selling “specific weapons systems” to Abu Dhabi.

The Prime Minister and the Minister of Defense have agreed that, in light of the fact the United States is upgrading Israel’s military capabilities and preserving its qualitative advantage, Israel will not oppose the sale of these systems to the United Arab Emirates.

In a separate statement, however, Gantz claimed that Netanyahu was aware of arms negotiations between the US and UAE at the time the UAE and Israel were concluding their peace deal, but had concealed that information.

Meanwhile, UAE Minister of State for Foreign Affairs Anwar Gargash said back in August that an Israeli peace deal removed “any hurdle” to Abu Dhabi procuring its long sought-after F-35s from the US.

US law limits the sale of the jets and other advanced weaponry to some Middle Eastern nations, under the principle of preserving Israel’s aforementioned “qualitative military edge” in the region. Congress has the right to review US weapons sales and can deploy a veto over such deals.