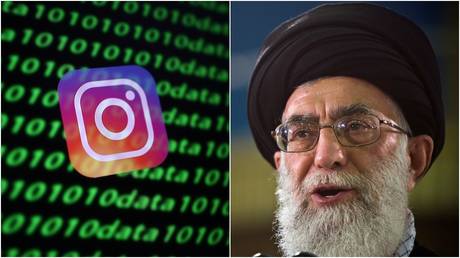 The page became inaccessible on Friday, two days after Khamenei’s missive to “young French people” was posted on social media. In his address, the Ayatollah blasted French President Emmanuel Macron as “stupid” for insisting that caricatures of the Prophet Mohammed were in line with that country’s values of freedom of speech. He also questioned why it was “OK” in France to insult the Prophet Mohammed, but illegal to doubt the Holocaust.

However, a shadow French-language account was quickly created for Khamenei, to repost the message in text and audio formats. The original account appears to be unblocked, but the message to French youths seems to have been removed.

Also on rt.com
‘Insulting’ Prophet Mohammed cartoons should be a crime in France like ‘doubting Holocaust,’ says Iran’s Khamenei

Macron has been facing harsh criticism from Muslim leaders after the French president vowed to clampdown on radical Islam, in response to the beheading of schoolteacher Samuel Paty outside Paris on October 16.

Party, in a freedom of expression class, had shown his students cartoons of Islam’s Prophet Mohammed, which had just been published by satirical French magazine Charlie Hebdo.

Making drawings of the prophet is considered blasphemous in Islam, and Macron’s statement defending the publication of the cartoons drew a wave of protests in several Muslim countries, as well as boycotts of French goods and accusations of Islamophobia.

Also on rt.com
Photos of Macron set alight & arrests made as Muslims protest over Prophet Mohammed cartoons outside French embassy in Moscow