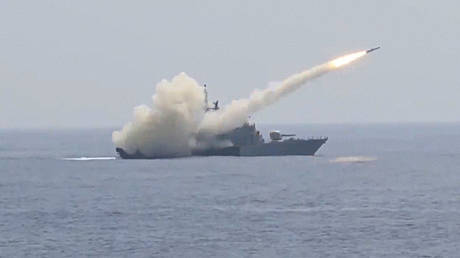 India’s anti-ship missile sunk a vessel during naval drills in the Arabian Sea, demonstrating New Delhi’s “combat readiness” in the Indian Ocean region where it is challenged by China.

The Indian Navy released footage of an INS Prabal corvette sinking an old, decommissioned frigate with a missile launched at maximum range.

The country’s veer-class corvettes are customized versions of Project 1241 (Tarantul class) Soviet missile warships, armed with KH-35 anti-ship missiles. According to the navy, the projectile “homed in with deadly accuracy at maximum range, sinking the target ship.”

The launch was part of ongoing drills involving the aircraft carrier INS Vikramaditya and a number of warships and attack helicopters, as India shows its strength and “combat-readiness” across the Indian Ocean region amid an ongoing border standoff with China.

The relationship between China and India has worsened in the last few months, after tensions flared up at the disputed border, known as the Line of Actual Control, in the Himalayan region. As a result of the fighting, 20 Indian soldiers were killed, according to India’s Minister of External Affairs, while China did not confirm the number of casualties on its side.

The two nations have held several rounds of high-level talks in an attempt to secure a peaceful resolution to the stand-off and ensure a comprehensive disengagement of troops. For now, both India and China maintain confrontational positions along their disputed border in the remote Ladakh region.

Also on rt.com
‘Differences, not disputes’: India & China agree on de-escalation plan, say border standoff ‘not in the interest of either side’

At the same time, China has been significantly expanding its engagements in the Indian Ocean, challenging New Delhi not just with its meaningful military buildup, but with the so-called “debt-trap diplomacy” that it exercises towards its partner nations in the region.

In a statement released earlier this week, India’s Ministry of Defense laid out its operational readiness at sea. While it did not mention China directly, the ministry stressed that in light of the “prevailing security situation” the navy “would continue maintaining a high-tempo of operations in coming months.”

READ MORE: India completes successful test of its own 3rd-gen anti-tank missile, in bid to end reliance on foreign weapons

Alongside the practice drill, the Indian Navy formally inducted the last of four indigenously built Anti-Submarine Warfare (ASW) stealth corvettes under Project 28 at the Naval Dockyard in Eastern Naval Command.