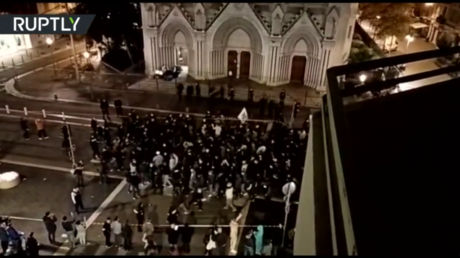 Members of the right-wing organization Generation Identity held a vigil outside the church that was the scene of the horrific terrorist attack in Nice on Thursday, in which three people were killed, two of whom were decapitated.

Scores of Identitarians gathered at 19:30 local time to lay a wreath in front of the church, observing a minute’s silence in honor of the victims and their families, before singing La Marseillaise, the French national anthem.

Eyewitness footage from the scene shows the group marching through the streets of Nice’s Notre-Dame district which bore witness to the carnage in Thursday morning’s attack. Members waved flags and banners as they marched. Though there was a heavy police presence, no clashes or incidents were reported.

For some, the mere sight of identitarian groups marching through streets drew comparisons with the Hitler Youth.

This was also the scene for a short time on Thursday evening outside Notre Dame church in #Nice. A crowd of around 100 men, waving flags and singing the French national anthem. Some chanting the far right slogan “on est chez nous” (translation ‘this is our home”) pic.twitter.com/IEc3jS7h4W

Elsewhere on Thursday, a supposed member of the anti-immigraion group was shot dead by police after refusing to lay down his handgun with which he had threatened various members of the public.

Police fired non-lethal munitions initially but the suspect reportedly lunged at them at which point they opened fire with live ammunition, killing him.

Tensions within French society have been mounting since school teacher Samuel Paty was decapitated by an Islamist terrorist earlier this month, after he showed Charlie Hebdo cartoons depicting the Prophet Mohammed to his students. The shocking killing prompted France to increase security at religious sites and wage a “battle against Islamist ideology”.