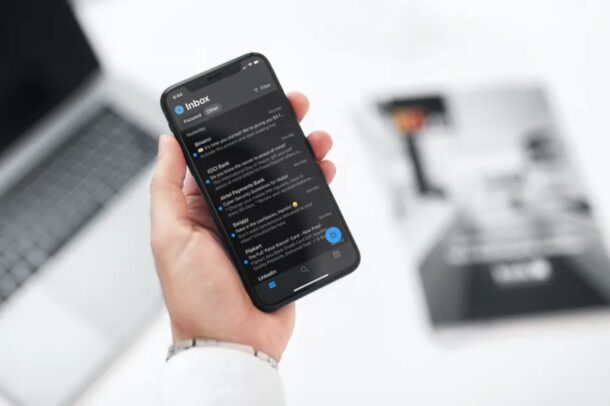 One of of the more exciting new changes to iPhone and iPad is the ability to set third-party mail apps as default. This ability requires iOS 14 and iPadOS 14 or later.

For now, you can change the default mail app to a different email client and change the default browser app too, so if you’re not a fan of the stock Mail app, or if you simply rely on another email app frequently, you’ll be excited to learn about this change.

Want to learn how you can set a different email client as the default mail app on your iPhone and iPad? Then read on!

For this instance, we’ll be using Microsoft’s Outlook app since it has been updated to support this feature. No matter what app you’re using, make sure you’ve updated it to the latest version from the App Store. Also, it goes without saying that your device must be running iOS 14 / iPadOS 14 or later on the device itself too.

That’s pretty much all there is to it. From now on, your iPhone or iPad will recognize the third-party app as the default Mail client.

If you can’t find the Default Mail App setting for the third-party client that you use, it shows that you’re either using an app that doesn’t support this feature yet or you’re still using an older version of the app.

For now, the third-party email clients that support this feature are Outlook, Gmail, Hey, and Spark, but more are updating frequently to include support for this feature. So just update your apps to see which support the feature.

If you use a different email app, you’ll likely need to wait for the developers to update their respective apps supporting this change.

Prior to the release of iOS 14, no matter what third-party email app you installed on your iPhone, the stock Mail app was still considered as the default one. This meant that whenever you clicked on an email address across apps, your device would launch Apple’s Mail app rather than the one you use. Although the stock Mail is preferred by most iOS users, there are still plenty of people who rely on third-party apps like Gmail, Outlook, etc.

Though Apple is currently limiting the ability to change default apps to browser and email apps for now, hopefully this expands to more categories in the future. For now, Apple will redirect you to its own apps for things like music, maps, photos, etc.

While this is obviously for iPhone and iPad, you can change the default Mail app on Mac too, a capability that has been around a very long time.

BTW, with the initial iOS 14 release, there was a bug that resets your default browser and mail apps back to Safari and Apple Mail upon restarting the device. But that has been fixed in a new update, so be sure to update your iOS device or iPadOS device to the latest version if you have not done so already. You’ll also have to make sure to change it back in settings if you reboot your iPhone or iPad.

It’s undeniably useful that you can change default email clients on your iPhone and iPad. Do you use this feature? Which is your preferred email app? Share your experiences, thoughts, and opinions in the comments section down below.

Holy cow! This HP Chromebook is only $129 for Black Friday