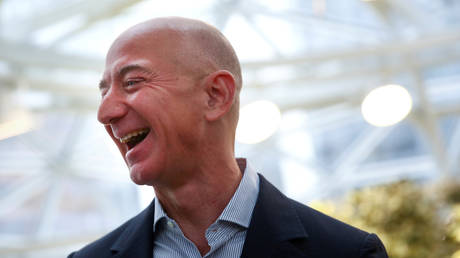 The latest blasting of Bezos came after the Amazon Prime Video Sports account called the UK footballer a “national hero” for using his sizable social media following to promote organizations that are offering free meals during the October school break.

Twitter commenters were outraged by the perceived hypocrisy, noting that Bezos, the world’s richest man, could not only feed hungry children in the UK, but globally, if he wanted to. One called Amazon a “tax-dodging mega-corporation,” and accused Bezos of “deciding not to end world hunger”.

Nothing quite like a tax-dodging mega-corporation, with the power to end world hunger but chooses to instead work its employees to death while they pee in bottles, putting their watermark over the efforts of black man fighting to fix the situation the mega corp helps create.

Many derided both the company and its CEO over tax avoidance, saying that Amazon and Bezos should pay their “fair share.”

If only Amazon paid their fair share of taxes. Bezos could end world hunger with half a days earnings

Other commenters mocked the company’s use of emojis, suggesting it was merely an effort to make the corporation look more personable. One user quipped that Amazon would decline to donate money for free school meals, but at least it would write that “no” followed by a heart emoji.

…yeah but did you not see they DID add a clapping emoji! and you can’t put a price on that