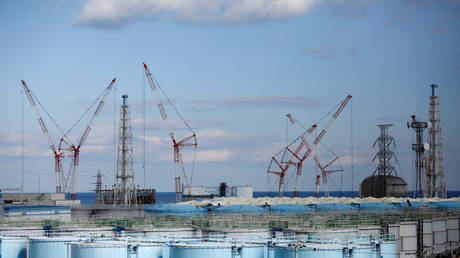 Greenpeace has warned that radioactive water from Japan’s crippled Fukushima nuclear plant contains matter that could damage human DNA if discharged into the ocean, as reportedly planned.

Contaminated water from the now-defunct Fukushima nuclear plant contains a radioactive substance which is harmful to human DNA, a Greenpeace report claims. The paper was released on Friday morning and addressed reports that Japan will discharge 1.23 million tons of water into the Pacific Ocean.

The publication titled ‘Stemming the tide 2020: The reality of the Fukushima radioactive water crisis’ claims that the supposedly treated water still contains “dangerous levels of carbon-14,” a radioactive substance that has the “potential to damage human DNA.”

Since the earthquake, tsunami and resultant nuclear catastrophe in 2011, Tokyo Electric Power (Tepco) has struggled to manage the buildup of contaminated liquid at the disaster site.

Storage tanks were built to house the contaminated water, which was used to cool the nuclear reactor cores. However, the cleanup task was made more difficult as it emerged that cracks in the reactors’ foundations had allowed huge quantities of water to seep into the earth and contaminate groundwater. This left the authorities with more water to treat.

Greenpeace also accused the government of spreading mistruths about the disaster’s aftermath. The report claims that the Japanese government has incorrectly described the water as “treated,” and has given the impression that radioactive tritium is the only radionuclide in the water.

Space to store the liquid is reportedly scheduled to run out by 2022, forcing the authorities to make a decision regarding its disposal.

Japanese Prime Minister Yoshihide Suga said on Wednesday that a decision needs to be made swiftly. “We cannot postpone the issue forever. We would like to make a decision responsibly as soon as possible,” he added.

Whilst the Japanese government has yet to make a formal announcement, it was reported last week that the authorities favor discharging the dirty water into the sea over the course of many years.

On March 11, 2011, the northeastern coast of Japan was hit by a 9.0 magnitude earthquake and a 15-meter tsunami. Fukushima’s nuclear plant largely survived the earthquake but was damaged greatly by the tsunami. The subsequent meltdown was the worst nuclear disaster since Chernobyl in 1986.