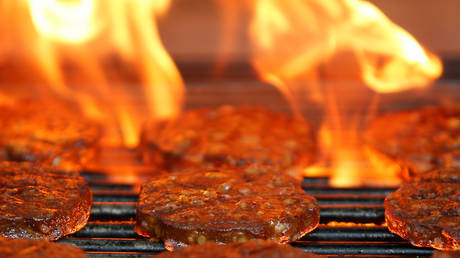 Plant-based products sold in the EU should be allowed to be called ‘burgers,’ ‘sausages,’ and ‘steak,’ despite containing no meat at all, the European Parliament said.

On Friday, the MEPs voted to reject the proposal by farmers, who insisted that labeling vegetarian substitutes with terms that are usually associated with meat products was misleading to consumers. Continuing this practice would open a “Pandora’s box” of confusing wording, European farmers association Copa-Cogeca warned.

“I’m going to celebrate with a vegan burger,” Jytte Guteland, an EU lawmaker from Sweden, said, after her colleagues decided to leave the terms ‘veggie burgers,’ ‘vegan sausages’ and ‘soy steaks’ on restaurant menus and shop shelves across Europe.

The European Consumer Organization (BEUC) also rejoiced over the decision, praising MEPs for their “common sense.” The group shared the stance of Greenpeace, the World Wide Fund for Nature, and other environmental organizations that the promotion of plant-based products was in line with EU policies to stop global warming.

“Consumers are in no way confused by a soy steak or chickpea-based sausage, so long as it is clearly labelled as vegetarian or vegan,” BEUC said in a statement. Such labeling only makes it easier for people to integrate those meatless products into their meals, it argued.

However, BEUC regretted the European Parliament’s decision to strengthen labeling rules for plant-based alternatives to dairy products and its support for banning terms such as “milk-like” or “cheese-style.” In 2017, the European Court of Justice forbade terms such as “soy milk” or “vegan cheese” for such items, ruling that words such as “milk,” “butter,” “cheese” and “yoghurt” can’t be used to describe non-dairy products.

The vote by the MEPs isn’t final, though, as labeling rules are part of a larger EU farming policy package. After the approval of this package by the Parliament, which is expected later on Friday, Brussels will need to reach agreement on the final policy with the block’s 27 member states.