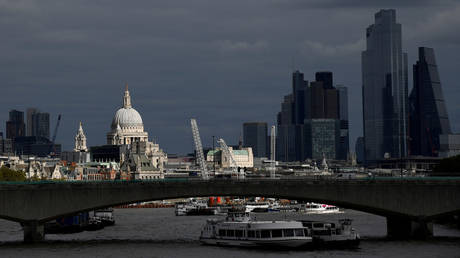 Germany’s deputy finance minister said on Friday that the European Union will need pragmatism in its relations with the UK because the City of London remains Europe’s biggest financial center.

German companies “rely massively” on wholesale financing offered from the City of London, Joerg Kukies told an Afore Consulting online event. “So in that sense we will have to maintain pragmatism, no matter what happens,” the deputy finance minister explained.

Kukies said he was “deeply concerned” about the lack of progress in trade talks between Brussels and London. However, he expressed hope that the current situation will not lead to “animosity,” citing the intensity of relationships between EU member states and Britain.

The UK’s post-Brexit transition period ends on December 31, and the City could be largely cut off from the bloc after that.

Also on rt.com
London refuses Welsh proposal to ‘back down’ on fisheries as time runs low on Brexit trade deal

The trade and security discussions are now being held in Brussels, after a week in the UK capital, and critical issues are still common rules and standards for firms, as well as rules governing state subsidies and the fisheries, according to von der Leyen.

The row over fishing quotas has persisted as a major stumbling block, with Paris insisting the EU should not bow to UK demands. French Europe Minister Clement Beaune went further by saying, “the face of Brexit will be the face of our fishermen,” and adding that their interests should be protected.

Despite the current disagreements, however, Brussels hopes to start the ratification process in mid-November, according to European Council President Charles Michel.