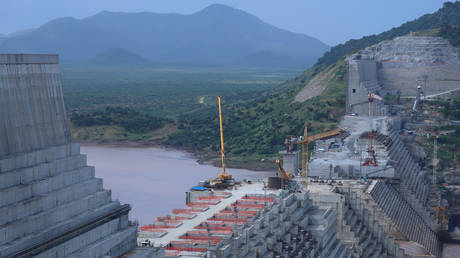 US President Donald Trump’s comment that Egypt will “blow up” a disputed dam that Ethiopia is building on the Blue Nile has sparked an outcry in Addis Ababa, where the government is calling the statement an “incitement to war.”

Also on rt.com
Sudan to join White House-brokered peace deal with Israel after call with US

The project has created a “very dangerous situation,” said Trump, because one of the country’s downstream neighbors, Egypt, which relies on the Nile and its tributaries for most of its irrigation and drinking water, “is not going to be able to live that way.”

The president’s comments came during a ceremony marking a peace deal between Israel and with Sudan, which is also downstream. “They’ll end up blowing up the dam,” Trump said of Egypt. “And I said it and I say it loud and clear – they’ll blow up the dam. And they have to do something.”

Ethiopian Prime Minister Abiy Ahmed said his country won’t cave in to “belligerent threats.” He added that Ethiopia is committed to talks led by the African Union on resolving disputes over the allocation of the Nile’s waters, and he has seen “significant progress” in negotiations. Known as the Grand Ethiopian Renaissance Dam (GERD), the project is billed by Addis Ababa as a way to bring millions of Ethiopians out of poverty.

Given such high stakes, Trump was wading into a fraught situation. “The incitement of war between Ethiopia and Egypt from a sitting US president neither reflects the longstanding partnership and strategic alliance between Ethiopia and the United States, nor is acceptable in international law governing interstate relations,” Andargachew said on Saturday.

The Trump administration, which previously tried unsuccessfully to broker an agreement to resolve the GERD dispute, last month announced it was suspending some of its financial aid to Ethiopia after the North African nation started filling the dam’s reservoir.

Egyptian officials have accused Trump of showing favoritism to Egypt and its president, Abdel Fattah al-Sisi. “Sorry to say, but the man doesn’t have a clue on what he is talking about,” former Ethiopian Prime Minister Hailemariam Desalegn said on Saturday. “Ethiopia and Ethiopians will never be threatened by such an irresponsible statement.”

European Union chief negotiator Josep Borrell said an agreement on the GERD between Ethiopia, Sudan, and Egypt is within reach. “Now is the time for action and not for increasing tensions,” he said.