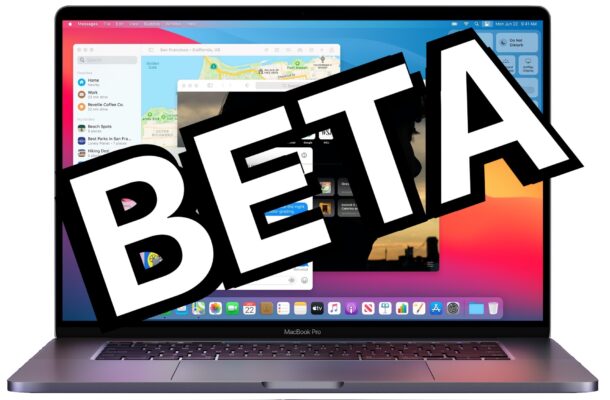 Apple has released macOS Big Sur beta 8 to those who are beta testing the macOS release. Usually developer betas come out first and are soon followed by public beta releases.

Although beta system software is typically less stable than final stable versions, anyone with a Big Sur compatible Mac can install the public beta of Big Sur if they want to. It’s generally recommended to only install beta software on secondary devices that are not your primary hardware.

MacOS Big Sur 11 includes a redesigned user interface, with new icons, refreshed Dock, and more white space with brighter UI elements. MacOS Big Sur also brings Control Center to the Mac, and new improvements and features are included in Messages app and Safari, along with instant language translation, and a variety of other improvements and changes.

Backup the Mac with Time Machine before proceeding with any software update.

The Mac will reboot in to complete installation.

Separately, Apple has finalized and released iOS 14 for iPhone, iPadOS 14 for iPad, tvOS 14 for Apple TV, and
watchOS 7 for Apple Watch to all users with eligible devices.

6 Best Ergonomic Gaming Mice You Should Buy in 2020

Surface Pro 7 w/ keyboard now only $599, its lowest price ever

Into The Spider-Verse suit in Spider-Man: Miles Morales moves just like the movie

How to Change Zoom App Ringtone and Notification Sound

How to Schedule Emails in Apple Mail with Automator on Mac

iPhone 12 Pro review: the phone that foreshadows the future

How to Remotely Control an Android Smartphone

How to Enable Enhanced Safe Browsing on Chrome for Android

Xbox Series X: Can celebrities get a free console upon request?

PS5 will make dying in games a lot less frustrating

Minnesota vs. Maryland, East Carolina vs. Tulsa, Hawai’i vs. Wyoming