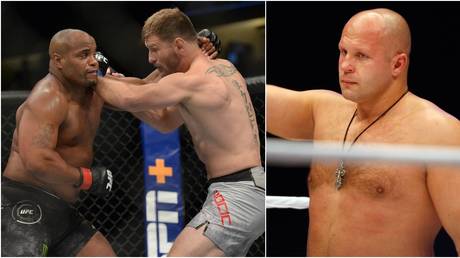 Saturday night’s rematch between Stipe Miocic and Daniel Cormier will determine the best MMA heavyweight of all time says Dana White, who rubbished suggestions that this particular mantle should be held by Fedor Emelianenko.

Russian great Emelianenko dominated the halcyon days of heavyweight MMA, running roughshod through the PRIDE roster in a four-year period between 2002 and 2006 and was, until recently at least, in a class of one when it came to considerations as to best heavyweight fighter the sport has seen.

Time, though, ticks ever onward. As Emelianenko’s influence waned in the latter part of his career, the position of the world’s best heavyweight fighter has been whittled down to the two men who compete in this weekend’s UFC 252 main event: champion Stipe Miocic, and his erstwhile and future opponent, Daniel Cormier.

The two UFC heavyweights have met twice before, and with the score currently tied at one apiece White says – in his best promotional tones – that Saturday’s bout isn’t just for UFC gold, legacy or bragging rights, it is for GOAT status.

“I saw some debate on if the winner of this fight would go down as the greatest heavyweight – there’s no f*cking debate. There’s no debate,” White told the media Tuesday in Las Vegas.

“The winner of this fight is the greatest heavyweight ever, not of this era, ever in the UFC history and in mixed martial arts. I know there’s talk about other guys and sh*t, you gotta look at who they fought.”

When asked if this included the likes of Emelianenko, the Master of Sport in his homeland and multiple time world champion across several different organizations, White was unmoved.

Also on rt.com
Fedor Emelianenko on his troubled brother Alexander: ‘I pray he will finally find himself’

White’s stance is likely influenced by more than one failed attempt to sign Emelianenko to a UFC deal. While Fedor’s legacy would certainly appear more robust if he was able to showcase his talents to a wider audience, anyone who witnessed the wrecking ball-like performances which amassed an essentially 33-fight undefeated streak (a sole loss in late 2000 was the result of a freak cut in a tournament) will attest to his efficacy in the cage, or ring.

Anyone but Dana White, that is.

Sergio Reguilon says Tottenham experience has surprised him so far

Joe Hart has warning for Tottenham players ahead of Burnley clash