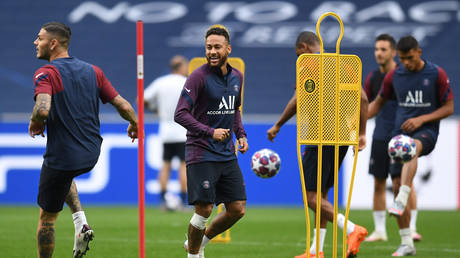 Neymar’s status as one of sport’s biggest global stars remains untouched as MILLIONS of fans took to social media to give their thoughts on the Brazilian superstar ahead of PSG’s crunch Champions League tie with Atalanta.

Neymar will be hoping to fire his side to their first Champions League semi-final of their new mega-rich era when his team take on the Italian side in their winner-takes-all clash in Portugal on Wednesday evening, and it seems that he has the football community enthralled – on social media, at least.

The former Barca man has wracked up nearly TWO MILLION Twitter mentions on Wednesday ahead of his Paris Saint-Germain’s crucial clash – and it all seems to have had its genesis from a tweet authored by his Brazilian international teammate Richarlison.

The Everton forward penned a note to wish his compatriot well ahead of the game, and cheekily asked his fans to photoshop Neymar into his own team’s colors, apparently leading to a spate of online creativity.

“Good morning guys!!! Passing here just to let you know that today there is a Neymar goal hahaha,” Richarlison tweeted via translation. “Does anyone make a montage of Neymar with Everton’s shirt there? Hahaha put on profile.”

And several eager football fans were quick to take up the challenge to imagine what it would look like if the world’s most expensive player donned Everton blue – perhaps the closest the Merseysiders will ever get to a player of that calibre.

Neymar appeared to get in on the act too, tweeting in his native tongue that he has his “mohawk made” in advance of the fixture.

Also on rt.com
Champions League: It’s time for Neymar to FINALLY live up to mammoth price tag and help PSG to European glory