Manchester United lost to Sevilla by 2:1 in the last four of the Europa League on Sunday night.

Manchester United’s long season ended in its 61st game and in semi-final heartbreak for the third time. Extra time appeared the favoured outcome before Luuk de Jong stole ahead of Victor Lindelöf and Aaron Wan-Bissaka to score the winner 12 minutes from time for Sevilla.

While they will meet Shakhtar Donetsk or Internazionale in Friday’s final, Ole Gunnar Solskjær’s side head for the beach and reflection on what might have been. A third-place Premier League finish is admirable but losing in the League Cup, FA Cup and now Europa League semi-finals is a disappointment United will not wish to repeat.

What cost them this evening should concern Solskjær as it is the leitmotif of many United defeats: a profligacy before goal and a vulnerable defence, that might have conceded four or five. This plus a lack of depth in most positions is what the manager has to address in this transfer window.

Sevilla were billed as probably the toughest opposition post-lockdown by Solskjær and so they proved, though it was his side that started – and ended – on the front foot.

First, Marcus Rashford found Bruno Fernandes, who relayed to Mason Greenwood. A corner was claimed but when this broke and Fred crossed Harry Maguire failed to make Yassine Bounou save.

Sevilla’s No 1 did repel a Rashford shot in the move that claimed United’s sole strike. Once more Anthony Martial’s blossoming as a world-class No 9 showed. His clever round-the-corner pass was a return to Rashford that allowed him to fire at Bounou and while the save was made Diego Carlos was adjudged by Felix Brych to have taken him out, and the referee awarded a penalty. After his trademark hop-then-swing Fernandes finished confidently into the top right corner.

Sevilla were unbeaten in 19 and showed why when Lucas Ocampos moved in behind and forced David de Gea to beat the ball out for a corner. This initiated a raising of temperatures that barely cooled until the end. Brandon Williams and Carlos were booked – the latter somehow having escaped the same fate for the spot-kick.

A Fred shot apart Sevilla were seeing far more of the ball near United’s goal. Each time Solskjær’s men tried an out pass Martial or Rashford could not make it stick. This presaged the concession of a defensively disastrous equaliser: Wan-Bissaka lost Sergio Reguilón and after the left-back coasted past him his cross was smashed home by Suso.

This had Rashford reviving a complaint about a throw-in not given ahead of the move but the real issue was a lack of control from United. Paul Pogba’s outing had thus far been anonymous: when he did finally link up to square a ball to Martial, the Frenchman blazed over but the difference this made was obvious.

Tempers again frayed when Maguire was penalised for a challenge on Youssef En-Nesyri and Julen Lopetegui accused United’s captain of an elbow. This had Brych warning Sevilla’s manager and Solskjær telling his opposite number to be quiet.

A swerving Rashford 30-yard free-kick tested Bounou and Fernandes’s volley did the same as United ended the half pinning Sevilla back, with Pogba having an extended word with Brych as the sides wandered off.

Solskjær had to calm his men and ensure the second half was one of focus on the prize of a final appearance. Again, United began brightly as Sevilla upped their quota of needle.

Chances came and went. A weighted Fernandes pass put Greenwood in and his right-foot shot was blocked, preventing what looked like United’s second. Next, Fernandes crossed for Martial but a point-blank Bounou save frustrated him. Rashford’s follow-up was stymied and moments later the Portuguese claimed a corner with yet another close effort that failed.

United’s brittleness was evident when Sevilla were able to punch through their weak midfield in response. This was a worry due to their serial spurning of opportunities. Again: Martial twice looked in but failed to apply the killer touch. 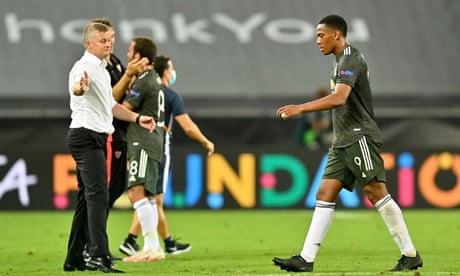 Lopetegui took off En-Nesyri and Ocampos, which at this point seemed strange as each had led the ploy to niggle United. Two back-heeled Pogba pirouettes took him clear but, again, no cutting edge was applied.

Alarm bells clanged when Joan Jordán’s free-kick hit Fernandes’s arm and a noisy Sevilla contingent yelled for a penalty: VAR ruled against. But now, Lopetegui’s decision to take off Ocampos was proved clever as De Jong finished past De Gea after Wan-Bissaka and Lindelöf slumbered; Fernandes appeared then to upbraid the latter.

United finished in frantic fashion but could not unlock Sevilla’s door. Now, for them, is all about next season.