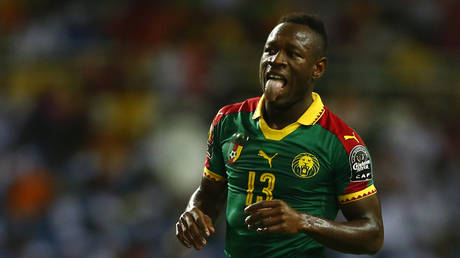 A pair of Chinese football commentators have been sacked after posting a video in which they thanked Covid-19 for infecting an opposing team’s player, thus ruling him out from competing in the game.

The two commentators, who worked for Dalian TV, were calling the action on the Super League clash between Dalian Pro and Henan Jianye.

One of the commentators, Guo Yifei, uploaded the now-deleted clip on a streaming platform called Douyin, where he was talking about the game with former China international Wang Peng.

The player who tested positive for Covid-19 was Cameroonian striker and Henan player Christian Bassogog.

Bassogog has been in hospital in Guangzhou, a city in the south of China, after testing positive for the deadly virus.

According to the South China Morning Post, Yifei appeared to sound happy at the news in the video and giggled to himself as he said: “It seems [Bassogog] won’t be coming back.”

On Sunday, Dalian TV made the announcement that both Yifei and Peng would be removed from their commentary duties with the channel.

“Especially at a time when the people of this country are in a struggle against Covid-19, cracking this kind of joke is unscrupulous behavior, causing great hurt to Bassogog, Henan Jianye, and Henan football fans,” the statement from Dalian TV read.

Dalian TV also demanded that Yifei and Peng put out an apology video, which both did on the very same day.

One fan reacted to the apology with disgust, noting that Yifei’s commentating skills have always been ‘low-level’.

“Growing up, out of all the Dalian football fans around me there was not one who didn’t find Guo Yifei annoying,” the post read.

“It’s not just his commentating skills that are low-level, it looks like his character is the same.”

Another wrote: “I extend my apologies to Henan Jianye! as someone who was born and raised in Dalian, I honestly find this so embarrassing.”

Peng played for Dalian’s former Super League club and won six titles as a member of the team.

Since the initial outbreak of the coronavirus last December, China has recorded over 4,500 deaths, with small outbreaks continuing to occur.

The Chinese Super League season resumed on July 25 after being postponed earlier this year because of the pandemic.

5 Basic Lessons From ‘The Intelligent Investor’

How does Upamecano compare to Liverpool’s defenders amid transfer talk?

Tottenham and Liverpool linked with Phillips, and Murphy is a big fan

Cavani one of the top number nines in world football