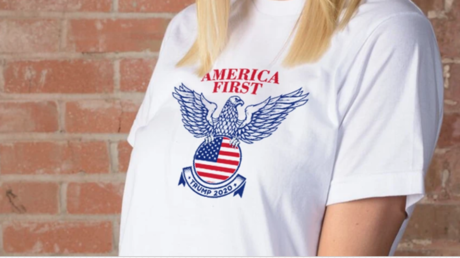 USA Today had egg on its face after running a “fact check” story verifying the theory that a Trump campaign T-shirt depicts a Nazi symbol. After causing outrage, it clarified that the bald eagle is a “longtime US symbol too.”

The similarities between the images boils down to the use of an eagle with its wings raised. Beyond that, critics could not find enough evidence to view USA Today’s piece as anything more than an anti-Trump puff piece.

Others trolled the paper on Twitter with images of eagles displayed by other US lawmakers, including Speaker of the House Nancy Pelosi (D-California).

Following your logic (Of which, there really isnt any logic involved at all, but then you are USA Today), then @SpeakerPelosi has worn her Nazi symbol openly and proudly upon her shoulder on many, many occasions. pic.twitter.com/4WY6ciPi5X

USA Today appeared to walk back their “fact check” in a “correction” on Sunday, noting that the eagle is a “longtime US symbol,” as well as a motif used by the Nazis, but confirming as “true” the “fact” that the Trump campaign has been accused of using a Nazi symbol.

Clarification: The claim that Trump 2020 has put out a T-shirt with a symbol similar to a Nazi eagle and is being criticized for it is true. Worth noting, the eagle is a longtime US symbol, too.

The accusations of the Trump campaign using Nazi imagery on the shirt were started by Bend the Arc: Jewish Action, a political advocacy group for “progressive Jews” that has accused Trump of using Nazi iconography in the past, and the Lincoln Project, a staunchly anti-Trump group made up of ‘never Trump’ Republicans such as George Conway.

Also on rt.com
Caitlin Johnstone: Liberals are CRAZY IDIOTS – they pretend to be for truth & morals, then worship John McCain & push Russia hoax

The Trump campaign responded to the accusations in a typically upfront fashion. “This is moronic. In Democrats’ America, Mount Rushmore glorifies white supremacy and the bald eagle with an American flag is a Nazi symbol. They have lost their minds,” Tim Murtaugh, the Trump 2020 communications director, told USA Today.

The Great Seal of America, on which the symbol depicted on the Trump T-shirt is most likely based, was designed in 1782, and features an eagle holding arrows and an olive branch. It is widely used in American politics and is impressed on “official documents such as treaties and commissions,” according to the State Department.