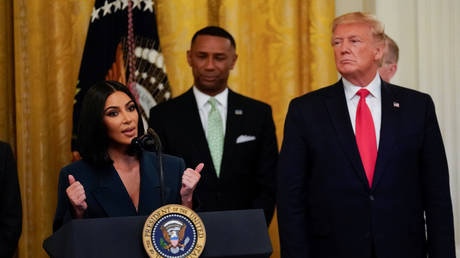 Since announcing his intention to run for president, Kanye West has sent Twitter into a frenzy, with many imagining – and dreading – what the White House would be like with reality television star Kim Kardashian as first lady.

Kardashian may have focused recent years on pursuing a law degree and advocating for prison reform – even visiting the White House multiple times – but the idea of the reality television star becoming the nation’s first lady is a thought many can’t wrap their heads around.

“#FirstLady” has been trending on Twitter since West announced he is throwing his hat into the 2020 race, though some have questioned his seriousness, and thousands of users have taken to posting clips of Kardashian from her long-running series ‘Keep Up with the Kardashians,’ highlighting more embarrassing moments that get to live forever thanks to the internet.

Clips have included everything from her physically fighting with her sisters to unfortunate shoutouts to the infamous sex tape that kicked off her career.

Kanye West announced that he will be running for president in 2020. Now imagine if Kim Kardashian becomes the first lady 🤓😦 pic.twitter.com/Oev9hGnZHm

Kanye West as President – Kim Kardashian as First Lady. Elon Musk as Attorney General, Khloe Kardashian as Secty of State and the rest of us moving to Canada, Mexico or any country that will give us asylum

Some even wondered if the cameras from ‘Keeping Up with the Kardashians’ would follow the reality star into the White House.

West announced his candidacy on Saturday, tweeting, “We must now realize the promise of America by trusting God, unifying our vision and building our future. I am running for president of the United States.” He then hashtagged “#2020Vision.”

Kardashian retweeted her husband’s message and added a US flag emoji, showing her support.

The rapper has spoken of his intention to run for president in the past, but has previously said 2024 would be the earliest he would run since he counts himself among President Donald Trump’s supporters, even visiting the White House at one point and meeting with him.

It’s unclear how serious the ‘Jesus Walks’ singer is about running, since there’s no obvious political party for him to lead as Trump is the presumed Republican candidate, Biden is the presumed Democrat candidate, and the biggest third party behind them, the Libertarian Party, has already made their pick for 2020. Running as an independent may create ballot access issues as the election is only four months away.

Still, West can already count on one big supporter besides his wife: Space X founder Elon Musk, who was pictured with the rapper days ago and responded to his tweet announcing his candidacy by saying, “You have my full support!”