CLOSE ADS
CLOSE ADS
Jake Tapper says Trump would have ‘saved lives’ if he’d worn mask earlier, is shown ‘no need for masks’ clip from his own show - The Media Guru

Skip to toolbar
Home TRENDING NEWS Jake Tapper says Trump would have ‘saved lives’ if he’d worn mask earlier, is shown ‘no need for masks’ clip from his own show 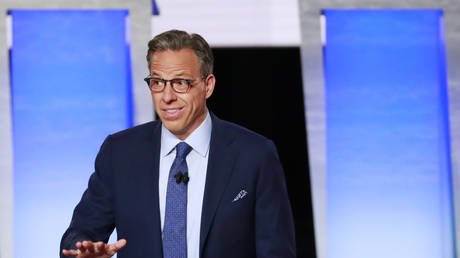 CNN’s Jake Tapper was confronted with coverage from his own show claiming masks were “not needed” during the Covid-19 pandemic, after he tweeted Donald Trump may have saved lives if he’d worn them in public months ago.

“Some day someone will do a study on how many lives might have been saved if this happened in February or March,” Tapper tweeted, reacting to the president being pictured for the first time wearing a mask.

Shaming citizens for refusing to wear masks in public – despite many states and businesses requiring them – has become commonplace on social media, but in “February or March,” health officials were claiming they were “not needed” and insisting Americans not go out and buy them.

Coincidentally, Tapper’s ‘The Lead’ was one of the many mainstream media outlets providing just such an update to people. A tweet highlighting that coverage was dug up and blasted across social media, with Tapper getting labeled a hypocrite by critics for his now seemingly staunch stance on masks saving lives.

In the first weeks of the coronavirus pandemic, leading health officials like Dr Anthony Fauci mainly warned against citizens buying masks because it could create a shortage that would affect hospitals in need of such supplies. On Tapper’s program, however, Dr Erica Shenoy, associate chief of Mass General Hospital’s Infection Control Unit, admitted that masks are only needed for people feeling sick and showing symptoms like coughing or sneezing. For healthy people, they provide only a “false sense of security,” according to the doctor.

Tapper, despite his newfound appreciation of masks, did not push back on anything Shenoy said.

The CNN anchor eventually responded to criticisms by waving off his own perceived responsibility in the matter and claimed that “health experts getting it wrong on masks in Feb/March” would be part of this hypothetical study he is using to criticize Trump.