CLOSE ADS
CLOSE ADS
Anyone Can Install iOS 14 Beta Without a Developer Account, But You Shouldn’t - Media Guru

Skip to toolbar
Home TRENDING TECHNOLOGY Anyone Can Install iOS 14 Beta Without a Developer Account, But You Shouldn’t 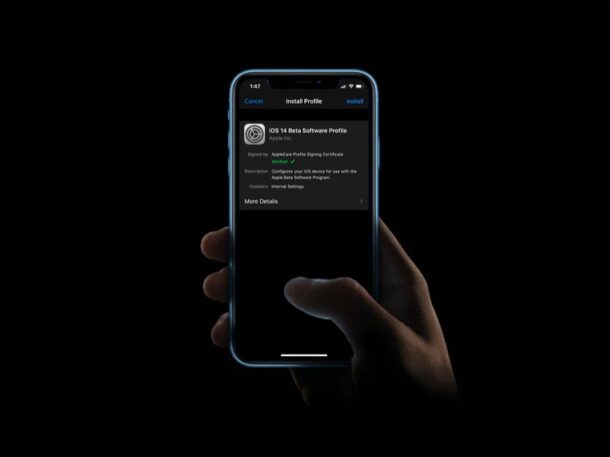 As you may already know, iOS 14 betas are available to download now for developers. While developer betas are intended to be limited to registered developers, technically speaking, anyone can actually install the iOS 14 dev beta onto a compatible iPhone or iPod touch right now. But that doesn’t mean you should.

Beta software is notoriously unreliable compared to final versions, and using developer beta versions in an unauthorized manner is not supported by Apple.

If you are interested in running beta system software of iOS 14, a much better solution is to simply wait for the iOS 14 public beta to open to the general public, and enroll in that.

Nonetheless, some curious and enterprising users go about installing iOS 14 developer betas anyway, usually by getting ahold of iOS 14 dev beta profiles from a registered developer friend, coworker, or even found somewhere online. As we mentioned before, it’s technically possible to do that, but it’s not recommended. But we’re an informational site, and so for the purpose of informing we’ll review how this is technically possible.

Before you go ahead and try to update your iOS device to the newest beta firmware, you need to make a backup of all the data stored on your device. This is to make sure you don’t lose them in case the software update fails.

How Anyone Can Install iOS 14 Developer Beta, Even Without Developer Accounts

Remember, iOS 14 Developer Beta is far from a stable release and not suitable for everyday use. We do not recommend installing this beta or using this process, a better approach is to enroll in the public beta program instead. We will not be responsible for any issues that you may come across during this update. The instructions provided are for informational purposes only.

This same thing applies to iPadOS 14 dev beta and other beta versions too, as do the same caveats and warnings.

Remember, beta system software is buggy and unreliable. If you install the update and regret it, you can downgrade from iOS 14 using the latest stable IPSW firmware file and then restoring from a previous iCloud or local backup to get back all your data.

So in summary, while installing the developer beta is technically possible on any compatible device, it’s really not a good idea to do so. Just have some patience and use the public beta instead.

This $17.5 Million Florida Mansion is Any Car Enthusiast’s Dream Home