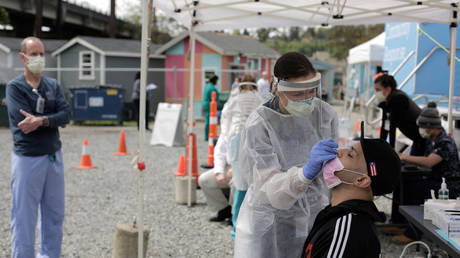 President Donald Trump has tweeted that the high number of Covid-19 cases in the US is actually a good thing as it is due to expanded testing, but the “fake news media” refuses to cover the shrinking mortality rate.

“Cases, Cases, Cases! If we didn’t test so much and so successfully, we would have very few cases. If you test 40,000,000 people, you are going to have many cases that, without the testing (like other countries), would not show up every night on the Fake Evening News,” the president tweeted on Saturday.

He continued, “In a certain way, our tremendous Testing success gives the Fake News Media all they want, CASES. In the meantime, Deaths and the all important Mortality Rate goes down. You don’t hear about that from the Fake News, and you never will. Anybody need any Ventilators???”

….In a certain way, our tremendous Testing success gives the Fake News Media all they want, CASES. In the meantime, Deaths and the all important Mortality Rate goes down. You don’t hear about that from the Fake News, and you never will. Anybody need any Ventilators???

Trump’s tweets follow Covid-19 cases within the US rising by over 55,000 on Thursday, a new daily global record. The US has recorded more than 2.8 million cases overall and around 130,000 deaths.

States like Florida have seen record rises in Covid-19 infections as well — over 11,000 new ones from the sunshine state reported on Friday — which has led governors to walk back on plans to end their lockdowns.

The mortality rate from coronavirus, however, has gone down. While statistics surrounding the virus change on a daily basis and some experts have predicted a soon-to-come spike in deaths, the virus has gone from claiming thousands of lives a day in April to about 600 a day now, based on numbers released in the last few weeks.

The president has argued that the rise in cases is directly linked to expanded testing before.

“Testing is a double edged sword — Makes us look bad, but good to have!!!” he tweeted.

Mark May Net Worth

admin
24
Reading the lines of the hand is called palmistry and it has been practiced in India and China for over 5000 years! Millions of peop...